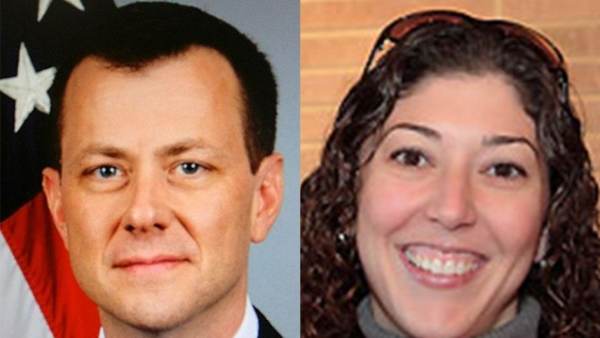 Former FBI lawyer Lisa Page, who gained notoriety as the anti-Trump lover of FBI agent Peter Strzok, is speaking out publicly for the first time just days before the Department of Justice Inspector General report is set for release on December 9. Page and Strzok exchanged text messages which were made public that exposed their affair and showed extreme political bias with statements that fueled concerns of a Deep State conspiracy against President Trump.

Page opened a Twitter account Sunday, with a statement promoting her sympathetic interview with the Daily Beast published Sunday evening.

Please allow me to introduce you to Lisa Page (@NatSecLisa), who tells me she is done sitting around and waiting for the storm to blow over.

Molly Jong-Fast interviewed Page and wrote the sympathetic article for the Daily Beast.

Her description of Page as victim of President Trump, and Page’s own complaints of victimization:

Page, 39, is thin and athletic. She speaks in an exceedingly confident, clear, and lawyerly way. But having been through the MAGA meat grinder has clearly worn her down, not unlike the other women I’ve met who’ve been subjected to the president’s abuse. She is just slightly crumbly around the edges the way the president’s other victims are.

It’s almost impossible to describe” what it’s like, she told me. “It’s like being punched in the gut. My heart drops to my stomach when I realize he has tweeted about me again. The president of the United States is calling me names to the entire world. He’s demeaning me and my career. It’s sickening.”

“But it’s also very intimidating because he’s still the president of the United States. And when the president accuses you of treason by name, despite the fact that I know there’s no fathomable way that I have committed any crime at all, let alone treason, he’s still somebody in a position to actually do something about that. To try to further destroy my life. It never goes away or stops, even when he’s not publicly attacking me.”

Page claims it was this Trump campaign speech mocking her and Strzok that prompted her to speak out.

For the nearly two years since her name first made the papers, she’s been publicly silent (she did have a closed-door interview with House members in July 2018). I asked her why she was willing to talk now. “Honestly, his demeaning fake orgasm was really the straw that broke the camel’s back,” she says. The president called out her name as he acted out an orgasm in front of thousands of people at a Minneapolis rally on Oct. 11, 2019.

Trump, who allegedly cheated on pregnant Melania with Stormy Daniels and is a legendary philanderer, mocks Lisa Page and Peter Strzok for having an affair pic.twitter.com/nmmsBe2kyd

Page expects to be cleared of wrongdoing by the IG report.

That was the moment Page decided she had to speak up. “I had stayed quiet for years hoping it would fade away, but instead it got worse,” she says. “It had been so hard not to defend myself, to let people who hate me control the narrative. I decided to take my power back.”

She is also about to be back in the news cycle in a big way. On Dec. 9, the Justice Department Inspector General report into Trump’s charges that the FBI spied on his 2016 campaign will come out. Leaked press accounts indicate that the report will exonerate Page of the allegation that she acted unprofessionally or showed bias against Trump.

How does it feel after all this time to finally have the IG apparently affirm what she’s been saying all along? She said she wouldn’t discuss the findings until they were officially public, but she did note: “While it would be nice to have the IG confirm publicly that my personal opinions had absolutely no bearing on the course of the Russia investigations, I don’t kid myself that the fact will matter very much for a lot of people. The president has a very loud megaphone.”

Page blames President Trump for the FBI and Justice Department abandoning “principles of truth and independence”.

…One thing becomes quickly apparent talking to Page; what really upset her, what still devastates her, was not the end of her extremely promising career at the FBI, but instead what Trump has done to the FBI itself.

“It’s very painful to see to places like the FBI and the Department of Justice that represent so much of what is excellent about this country, not fulfilling the critical obligation that they have to speak truth to power,” she tells me. “The thing about the FBI that is so extraordinary is that it is made up of a group of men and women whose every instinct is to run toward the fight. It’s in the fiber of everybody there. It’s the lifeblood. So it’s particularly devastating to be betrayed by an organization I still care about so deeply. And it’s crushing to see the noble Justice Department, my Justice Department, the place I grew up in, feel like it’s abandoned its principles of truth and independence.”

The interview is getting the reaction it was designed to get: Page as victim and Trump as abuser:

“I want to retweet every paragraph of this so that everyone knows how Trump has abused Lisa Page the way he’s abused so many other women, physically, emotionally & psychologically. Brava for her decision to “take my power back.” And to you @MollyJongFast for capturing it so well.”