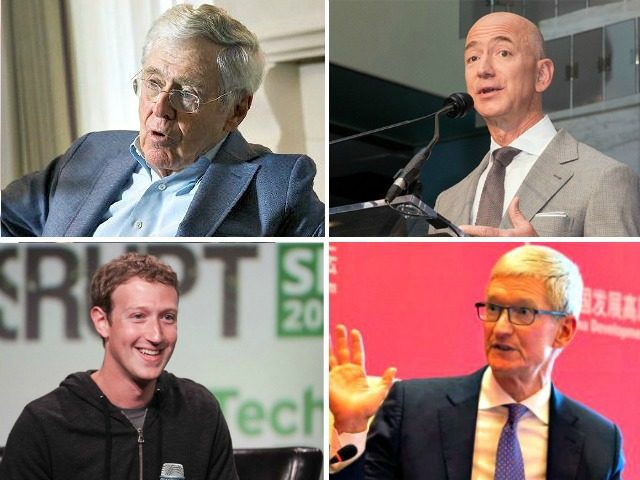 Six of the Silicon Valley Masters of the Universe have been accused of dodging $100 billion in taxes by a British tax watchdog.

CNBC reports that six major Silicon Valley tech firms have been accused of having a combined “tax gap” of $100 billion over the past ten years according to an analysis by a British tax organization. Fair Tax Mark, a British organization that certifies businesses for proper tax conduct, examined the global tax payments of Facebook, Apple, Amazon, Netflix, Google, and Microsoft from 2010 to 2019.

The research analyzed the company’s 10-K filings submitted to the U.S. government by the tech giants. Fair Tax Mark looked at tax provisions, which is the amount that companies set aside in their financial reports to pay taxes, and compared these with the amount of money that the companies actually paid to the government, called cash taxes. Researchers found that over the past ten years, the gap between the tax provision set out by the tech firms and the taxes they actually paid was approximately $100.2 billion.

The report also claimed that the profits were “shifted to tax havens, especially Bermuda, Ireland, Luxembourg and the Netherlands.” The researchers noted that most of the tax shortfall “almost certainly arose outside the United States,” with tax charges from countries outside the United States coming to 8.4 percent of the companies’ profits overseas.

Paul Monaghan, CEO of Fair Tax Mark, discussed the report with CNBC stating: “The amount of tax being paid by these businesses is $100 billion less than reported in their accounts.” The report noted that Amazon was the worst offender of the six tech firms. The report alleged that Amazon paid $3.4 billion in income taxes since 2010, noting that the cash tax paid by Amazon amounted to 12.7 percent of its profit for the decade despite the corporate tax rate being set at 35 percent for seven of the past ten years. President Donald Trump cut the corporate tax rate to 21 percent in 2017.

The report stated: “The company is growing its market domination across the globe on the back of revenues that are largely untaxed and can unfairly undercut local businesses that take a more responsible approach.” A spokesperson for Amazon told CNBC in a statement