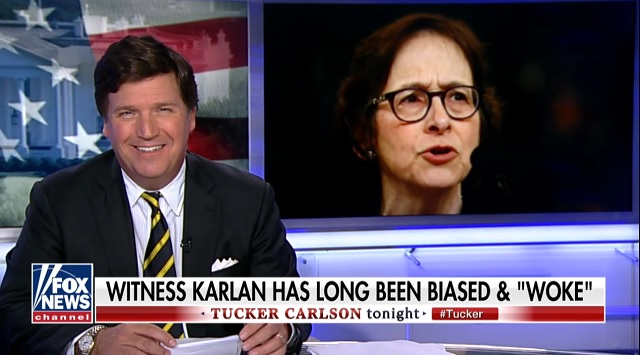 The Democrats’ impeachment inquiry on Wednesday was a dumpster fire.

As Tucker Carlson highlighted on his show Wednesday night, the star of the hearing was Stanford law professor Pamela Karlan, who likes to describe herself as a “snarky, bisexual, Jewish” woman:

Carlson mocked her testimony and found some old footage of her pushing the lie of “white male privilege” all the way back in 2006.

“We have to seize back the high ground on patriotism and love of our country because we have more reason than they do to love America,” Karlan says in the clip. “The rich, pampered prodigal sanctimonious incurious white, straight sons of the powerful do pretty well everywhere in the world and they always have.”

“This lady needs a shrink,” Carlson joked. “‘The sons of the powerful?’ Really? You are a law professor at Stanford and you are lecturing other people how they are powerful? Right.”

During her testimony, Karlan also regurgitated old neocon talking points insisting we need to arm the Ukrainians “so we can fight the Russians there and we don’t have to fight them here.”

Professor Karlan just went full neocon and said we need to arm Ukraine to fight the Russians there so we don’t have to fight them here. Yes, really. pic.twitter.com/jeMPXgP7kf