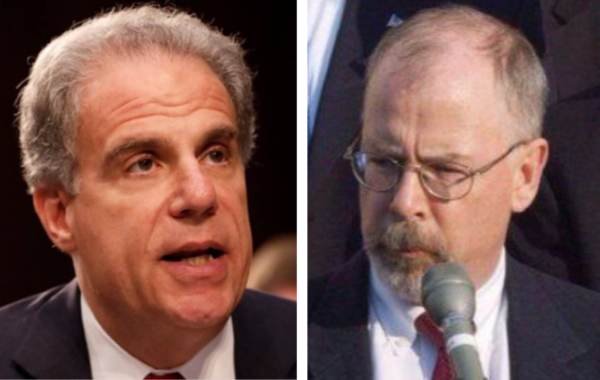 The Fabricated “Predicate” to Spy on the Trump Campaign

While Inspector General Michael Horowitz did a pretty fair job of documenting the crimes of the FBI in getting the green light from a Federal Judge to spy on Carter Page as an ostensible agent of the Russians, he utterly failed to investigate the cornerstone (aka the “predicate”) for launching this whole sordid affair. That predicate?  George Papadopoulos, an obscure foreign policy advisor to the Trump Campaign, reportedly told  Australia’s High Commissioner to the UK (and Clinton crony), Alexander Downer, that the Russian Government had dirt on Hillary Clinton. But Papadopoulos was simply passing on gossip he heard from Joseph Mifsud, an intelligence agent tied to British secret services, not the Russians.

In a competent world of law enforcement and intelligence officials, this kind of hearsay (I heard it through the grapevine) would not pass the laugh test. But not in the partisan world of the FBI. The FBI leadership, according to Inspector General Horowitz, unanimously agreed that the unsubstantiated hearsay justified launching a full scale counterintelligence investigation and spying on the Trump campaign. Michael Horowitz reports that:

the FBI opened Crossfire Hurricane on July 31, 2016, just days after its receipt of information from a Friendly Foreign Government (FFG) reporting that, in May 2016, during a meeting with the FFG, then Trump campaign foreign policy advisor George Papadopoulos “suggested the Trump team had received some kind of suggestion from Russia that it could assist this process with the anonymous release of information during the campaign that would be damaging to Mrs. Clinton (and President Obama).”

McCabe said the FBI viewed the FFG (aka Downer) information in the context of Russian attempts to interfere with the 2016 U.S. elections in the years and months prior, as well as the FBI’s ongoing investigation into the DNC hack by a Russian Intelligence Service (RIS). He also said that when the FBI received the FFG information it was a “tipping point” in terms of opening a counterintelligence investigation regarding Russia’s attempts to influence and interfere with the 2016 U.S. elections because not only was there information that Russia was targeting U.S. political institutions, but now the FBI had received an allegation from a trusted partner that there had been some sort of contact between the Russians and the Trump campaign.

Here is Mueller’s account of how the investigation started:

In late April 2016, Papadopoulos was told by London-based professor Joseph Mifsud, immediately after Mifsud ‘s return from a trip to Moscow, that the Russian government had obtained “dirt” on candidate Clinton in the form of thousands of emails.

It is critical to take note that George Papadopoulos did not solicit Russian dirt on Hillary Clinton. That offer came from Joseph Mifsud. Inspector General Horowitz makes little mention of Mifsud beyond noting that he lied to the FBI about his conversation with Papadopoulos. That incuriosity is troubling and inexcusable if one is serious about understanding the predicate for spying on the Trump campaign. Michael Horowitz took a pass.

Robert Mueller identifies Mifsud in the report as someone with close ties to Russia. Good old guilt by association without one shred of proof. Mueller’s report describes Mifsud as:

. . . a Maltese national who worked as a professor at the London Academy of Diplomacy in London, England.  Although Mifsud worked out of London and was also affiliated with LCILP, the encounter in Rome was the first time that Papadopoulos met him. Mifsud maintained various Russian contacts while living in London, as described further below.

Joseph Mifsud was not and is not an agent of Russia. He was working for western intelligence. If you want to get the full picture of Mifsud’s ties to British intelligence, the CIA and the FBI, I encourage you to read, The Death of Russiagate?, Mueller team tied to Mifsud network, a tangled web. This article provides actual evidence about the intelligence pedigree of Joseph Mifsud. Robert Mueller, by contrast, provides not one single piece of actual evidence. Mueller and his team of clown lawyers relied on innuendo and guilt by association. And Horowitz just ignores Mifsud, pretending he is irrelevant to the “predication.”

The next critical event in the predication chain, according to both Mueller and Horowitz, was Papadopoulos speaking with Australian diplomat, Alexander Downer. Mueller reports:

One week later, on May 6, 2016, Papadopoulos suggested to a representative of a foreign government that the Trump Campaign had received indications from the Russian government that it could assist the Campaign through the anonymous release of information that would be damaging to candidate Clinton.

The name of Alexander Downer does not appear in Mueller or Horowitz report.

Why did “FFG” aka Alexander Downer, who reportedly heard about the Russian dirt on Hillary from the lips of a tipsy George Papadopoulos in early May, wait more than two months to tell the United States about it? Downer claims it was Wikileaks publication of the emails that was the last straw. However, it was not a secret of state on June 14, 2016 when Ellen Nakashima of The Washington Post reported Crowdstrike, a private cyber security firm hired by the DNC, “discovered” that the Russians had hacked the DNC. Why did Downer not react to that news? And why did the FBI treat the supposed attack by Russia with such an incurious approach? They did not set up a task force. They did not subpoena the server nor press the NSA for corroborating evidence that would have exposed a Russian plot.

Instead, Comey’s FBI was content to passively receive information provided by Crowdstrike rather than get access themselves. No answer to these questions is provided by either Michael Horowitz or Robert Mueller.

A careful reading of the Horowitz report reveals that Downer told his hearsay to Gina Haspel, the current Director of the CIA who was the CIA’s Chief of Station in London at the time.

On Jul 27 2016 the USG official called the FBI’s Legal Attache (Legat) and in the European city to her office and provided them [BLACKED OUT MATERIAL] The Legat told us he was not provided any otherinformation about the meetings between the FFG and Papadopoulos.