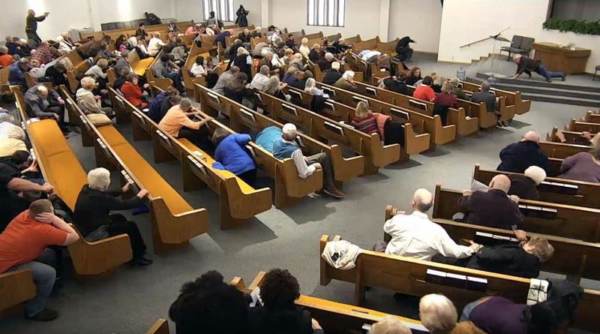 Shooting at Texas Church Leaves Two Dead and One Injured, Gunman Stopped After Being Shot By Armed Church Member

Two people have died and one person is in critical condition after a shooting at the West Freeway Church of Christ in northwest Texas.

The shooter was prevented from creating more carnage by armed members of the church, several of whom drew their own weapons in response to his attack, as well as a security guard. Though it has been confirmed that the gunman was shot, it remains unclear if he is one of the two people killed.

Updates from Mike Drivdahl, FWFD PIO:
White settlement police got the call at 9:57 am of gun shots.
Three were transported to the hospital in critical condition. One is believed to be the shooter.
He cannot conform any deaths. #whitesettlement #shooting #fortworth pic.twitter.com/F97v4lHqIS

The church was livestreaming their service to YouTube when the incident took place, but the video has since been made private. In the video, dozens of terrified worshippers can be seen ducking under pews as the shoot out unfolds.

The church was live streaming its service at the time of the attack. It appears in the video that when one person began shooting, others shot back. https://t.co/3HU29rIOQ2

“A very tragic day when anybody in our community suffers,” Mike Drivdahl, a spokesman for the Forth Worth Fire Department, told reporters at a news conference. “Our hearts and prayers go out to all the families who are affected by this.”

A witness told CBS 11 News that the gunman had shot a server during communion, before being shot and taken down by another church member. The incident took place around 10 a.m. local time.

“It was the most scariest thing. You feel like your life is flashing before you. I was so worried about my little one,” Isabel Arreola, who witnessed the shooting, told CBS.

MedStar spokeswoman Macara Trusty told the Dallas News that one person died at the scene and another died while being transported to the hospital.

Texas Attorney General Ken Paxton issued a statement about the shooting on Twitter, asking for prayers for the victims.

We are shocked and saddened to hear reports of a shooting at a church in White Settlement.

As reports come in, please pray for any victims and their families, this congregation, and the law enforcement officials at the scene. My office will assist in any way needed.

“We are shocked and saddened to hear reports of a shooting at a church in White Settlement,” he wrote. “As reports come in, please pray for any victims and their families, this congregation, and the law enforcement officials at the scene. My office will assist in any way needed.”

This is breaking news and the story will be updated as more information becomes available.