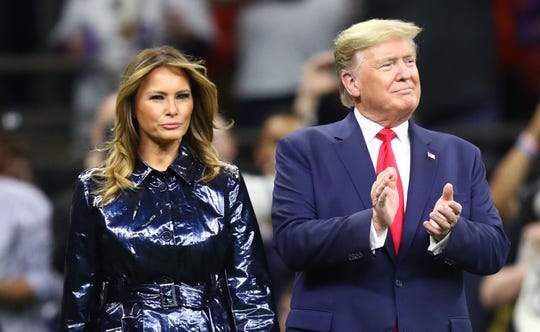 The president traveled with first lady Melania Trump to the Superdome in New Orleans, Louisiana, for the game.

Fans of both teams also chanted “U-S-A!” as the president and first lady arrived on the field for the National Anthem. Others shouted, “Four more years!”

President Donald Trump greeted with massive cheering and USA chants before the national title game between Clemson and LSU. pic.twitter.com/DWArMT1Qz5

How the crowd reacted when President Donald Trump walked in to the National Championship Game. pic.twitter.com/1a0nyLrYNV

The crowd in New Orleans for the #LSUvsCLEM game just erupted as Trump entered.

Trump is doing something right if he’s booed by DC elites at the Nats game and praised by real America. pic.twitter.com/1WiIbRzoWD

When asked by ABC’s Karen Travers whom the president liked, he grinned and replied, “both.”

The president kicked off 2019 by welcoming the Clemson Tigers to the White House to celebrate their 2018 championship, feeding them a fast-food feast during the government shutdown.

In November, the president attended a game between LSU and the Alabama Crimson Tide in which the Tigers won the close game by five points.

Trump spoke about the team while campaigning in the state for Republican candidates.

“Your quarterback is fantastic, and some other players are fantastic,” Trump said about LSU quarterback Joe Burrow in a local interview. “He seems to be a real standout. He’ll be, I think he’s gonna be tremendous in the NFL.”

The president also called the LSU coach in December to congratulate him after the team won a smashing victory against the Oklahoma Sooners 63-28.