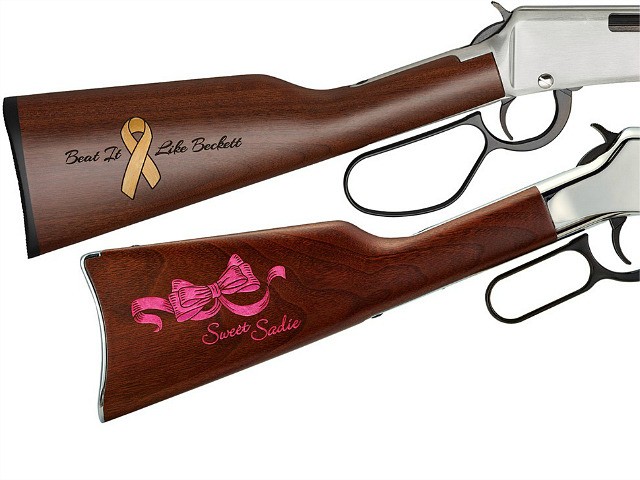 Henry Repeating Arms designated 126 specialty-made rifles for charity to raise money for two children with cancer and brought in nearly $80,000.

Henry reports that the official figure is $78,250.

On January 3, 2020, Breitbart News reported that Henry had designed two rifles that would be sold in two batches, the first of which had already been sold at the time of the Breitbart report and the second of which was being manufactured for sale just weeks after the report ran.

One of the rifles is called “Sweet Sadie.” It is a lever-action .22 s/l/lr with engravings that are “hand-painted pink” for Sadie Kreinbrink, a three-year-old girl from Ostrander, Ohio, who has Embryonal Rhabdomyosarcoma. Her treatment includes over a year of chemotherapy.

The second rifle is called “Beat It Like Beckett,” a lever action with “a large loop lever, a brushed metal receiver cover, and a 17” blued steel octagon barrel,” designed to raise money for four-year-old Beckett Burge.

Beckett is from Princeton, Texas. He has leukemia and is undergoing “rigorous treatment.”

Henry Repeating Arms was able to give the Burge family $35,525 and the Kreinbrink family $45,725 from the sale of the rifles.

Henry president Anthony Imperato commented, saying, “We are so thrilled with our fans and everyone that chose to support the Kreinbrink and Burge family by purchasing one of these rifles. It’s initiatives like this that have the potential to show the media and the rest of the world how great of an industry our firearms industry is.

He added, “Firearms manufacturers tend to get a black eye by the media more often than not, so this along with all of our other Guns For Great Causes campaigns should go to show all the good we can do.”