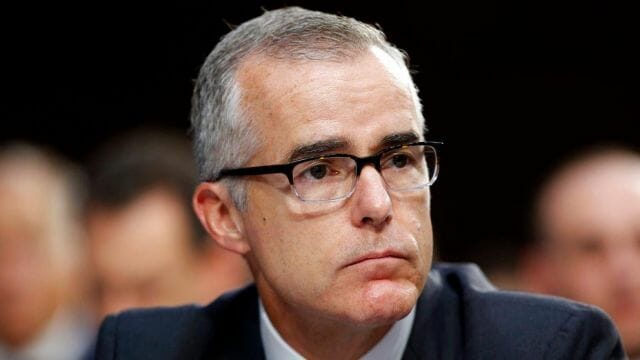 The charges against McCabe were related to his false statements to feds in the FBI’s investigation into Hillary Clinton.

McCabe was criminally referred to the US Attorneys office for prosecution in the Spring of 2018 after the DOJ Inspector General found McCabe lied to federal investigators.

McCabe — the former deputy and acting director of the FBI — appealed the decision of the U.S. attorney for Washington all the way up to Jeffrey Rosen, the deputy attorney general, but he rejected that request, according to a person familiar with the situation.

So what happened at the DOJ between September and today that caused a huge reversal on McCabe’s imminent indictment?

Jessie Liu, who recommended criminal charges against McCabe, resigned this week after Trump withdrew her nomination for a job at the Treasury Department.

Liu was involved in several of Mueller’s cases including the prosecution of General Flynn and Roger Stone.

Just two days after Jessie Liu resigned, the Department of Justice announced it dropped its criminal investigation into Andrew McCabe.

His lawyers made the announcement on Friday morning.

McCabe’s attorneys told reporters this morning, “We are pleased that Andrew McCabe and his family can go on with their lives without this cloud hanging over them.”

Americans are fed up with the two-tiered justice system!