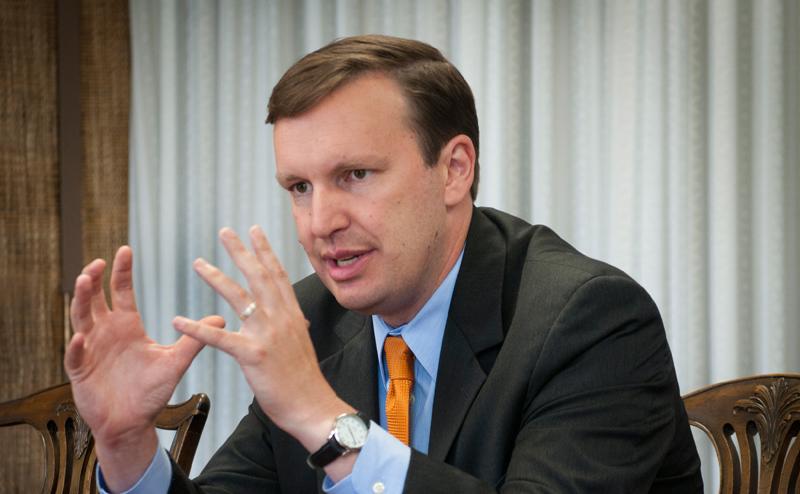 Digs deeper when he tries to explain

The Connecticut Democrat who voted to impeach President Donald Trump apparently sees nothing wrong with meeting with “adversaries” as long as the meetings are conducted by Democrats. Trump seemed to be taken by surprise and told reporters Tuesday it “sounds like to me a violation of the Logan Act.”

President Trump: “I saw that…Senator Murphy met with the Iranians; is that a fact? I just saw that on the way over. Is there anything that I should know? Because that sounds like to me a violation of the Logan Act.” pic.twitter.com/qOEwDaRptR

The State Department reportedly knew nothing of the secretive meeting during the Munich Security Conference, according to Mollie Hemingway of The Federalist.

“Such a meeting would mean Murphy had done the type of secret coordination with foreign leaders to potentially undermine the U.S. government that he accused Trump officials of doing as they prepared for Trump’s administration,” Hemingway wrote, citing Murphy’s 2017 criticism of then-National Security Adviser Mike Flynn.

And for Democrats who attacked Trump over his call with the Ukraine president last year, the hypocrisy was even more blatant with Murphy’s actual recounting of the meeting with Zarif. Apparently no transcripts are needed when Democrats speak with foreign leaders, and Murphy’s Twitter thread made the secretive rendezvous seem even shadier.

1/ Attached is my usual account of my latest trip abroad, this one to Ukraine and Munich.

I met w the Iranian Foriegn Minister in Munich. It’s dangerous not to talk to adversaries, esp amidst a cycle of escalation.

Quick thread on what I told Zarif.https://t.co/2oYjiXfZ7J

The Democrat lawmaker continued to give his version of events, with no link to any sort of official transcript of the conversation. He also published an account of the trip on Medium.

2/ First, I urged him to control any Iranian proxies in Iraq who might attack U.S. forces and allies there.

Second, I pressed him to release American citizens being unlawfully detained in Iran.

Third, I pushed him to end the Houthi blockage of humanitarian aid in Yemen.

Murphy argued that Congress sets foreign policy as a way to excuse that “many of us have met w Zarif over the years,” while admitting no one in Congress has the power to negotiate with the Iranian leader.