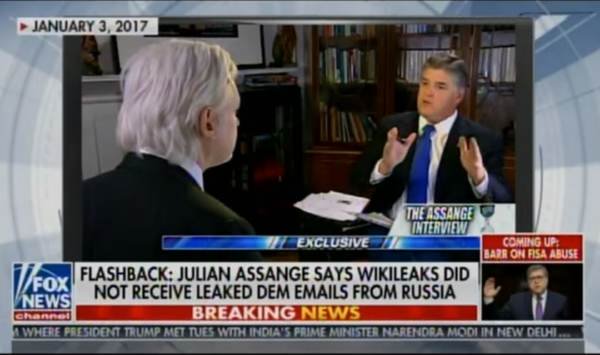 Sean Hannity ran a segment on Tuesday night defending Wikileaks founder Julian Assange.
Julian’s attorneys are in court this week fighting his extradition to the United States for trial.

Unequal Justice Under the Law–

Hannity told his audience, “The US government wants to bring Julian Assange back to the US and face espionage act charges for publishing otherwise, quote “secret materials” from, they say, Russia. He denied it when I interviewed him. But Hillary Clinton’s secret server had, let’s see, top secret information on it. A clear violation of the espionage act. Where are those charges?… She paid for Russia disinformation. And Hillary Clinton literally colluded with a foreign government. Why isn’t she being held accountable? She paid for Russian lies!

Sean Hannity also pointed out the Pentagon Papers where the Supreme Court decided, 6–3, that the government failed to meet the heavy burden of proof required to prevent publication of the government documents.

Sean then mentioned his interview with Julian Assange in London at the Ecuadorian Embassy in January 2017 who told him SIX DIFFERENT TIMES he did not receive the Podesta emails from Russia.

For some reason Robert Mueller never interviewed Julian Assange who was the one person who could have told him about the leaked Hillary campaign emails.
Why was that?