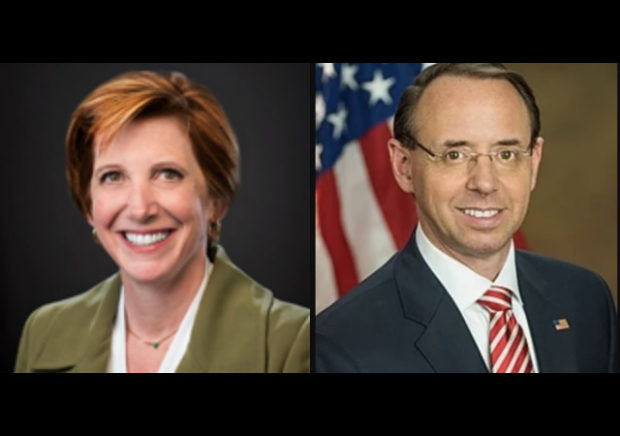 The Wuhan Coronavirus cases now stand at 80,598 distributed within 41 different countries and territories. The death toll is currently at 2,712.

Rod Rosenstein’s sister gins up fear with her CDC statement

Yesterday, I looked at how people have used news about COVID-19 as click-bait. Additionally, Professor Jacobson noted that the virus had merged with Trump Derangement Syndrome as a means of attacking President Donald Trump and tanking his outstanding economic success.

One of the challenges I face in analyzing reports about the Wuhan coronavirus is determining propaganda and reality. While I do not believe the Chinese have fully disclosed the number of deaths, I had not anticipated a member of the Center For Disease Control and Prevention (CDC) would use her platform to distort the risks associated with the pathogen to undermine the administration.

Today, reports stated that a CDC official has warned that the agency expects the novel coronavirus to begin spreading in the U.S. at the community level, and that “disruption to everyday life may be severe.”

Dr. Nancy Messonnier, the agency’s director of the National Center for Immunization and Respiratory Diseases, said in a press briefing on Tuesday that the time for Americans to begin preparing for a potential outbreak of the virus is now, although officials believe the immediate threat to the public remains low.

“As more and more countries experience community spread, successful containment at our borders becomes harder and harder,” Messonnier said. “Ultimately, we expect we will see community spread in this country. It’s not so much a question of if this will happen anymore, but rather more a question of when this will happen, and how many people in this country will have severe illness.”

The news has spooked investors and impacted the stock market. Imagine my surprise that Dr. Nancy Messonnier has a deeply deep state connection in the form of her brother, former Deputy Attorney General Rod Rosenstein.

2) What makes the statements by Dr. Messonnier even more interesting is the fact she is the only sister of former DOJ Deputy Attorney General Rod Rosenstein.https://t.co/CJAVEBs62H

Being skeptical of all things on social media, I confirmed that this relationship was listed correctly.

“While the immediate risk to individual members of the American public remains low, there is now community transmission in a number of countries, including outside of Asia, which is deeply concerning,” Azar said, speaking before a Senate appropriations subcommittee. He said recent fast-spreading outbreaks in Iran and Italy were particularly worrying.

“We are working closely with state, local, and private sector partners to prepare for mitigating the virus potential spread in the United States, as we will likely see more cases here,” he said.

Azar said the additional funding would help the U.S. expand surveillance systems for the new virus, support state and local governments, help development of vaccines and therapies and expand stockpiles of protective equipment like surgical masks.

Azar’s statement is far more consistent with the fact that despite all the several hundred monitored cases of coronavirus in the country, only 53 have turned up positive. And those 53 include 39 who got infected on the cruise ship Diamond Princess, which is quarantined off the coast of Japan.