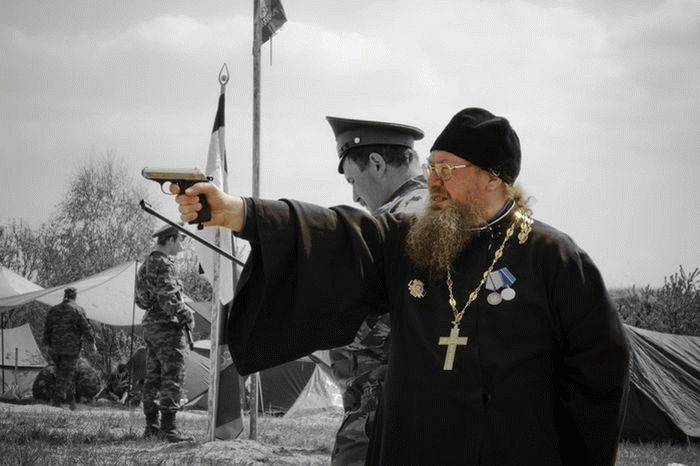 Gun Ownership Is Good for Society – These Russian Priests Explain Why

When criminals attack you at night, why should you have to defend yourself with a mobile phone, providing them with 30 minutes to kill you, while you are waiting for help from the State? Why should an innocent girl be a victim, deprived of the right to defend her honor, when she is attacked by a rapist? Why can the government afford an armed guard, yet we cannot protect our own families?

We asked several experts in Russia what they thought about the legalization of short-barreled firearms and the right to effective self-defense.

Writer, Theologian, Missionary, Priest at the Nativity of St. John the Baptist Church in Sokolniki

I believe that it is necessary to legalize weapons, because a person has the right to defense and self-defense. It is one thing to respond to evil with good, as stated in the Gospel: “He who strikes you on your right cheek, turn the other cheek to him also” (Matthew 5:39). But when it comes to protecting your life or the lives of others, it is absolutely necessary to use weapons as self-defense.

Unfortunately, at the moment, law enforcement agencies cannot ensure the safety of citizens, and the criminal world is rearmed. Why do criminals have firearms, and ordinary citizens don’t? We should consider the example set by the USA: In American states where weapons are allowed, fewer criminal offenses are committed. Shooting a registered weapon is the same as leaving your business card at the crime scene. Life every year becomes more difficult, so at least people should have a chance to defend themselves. Thus, a criminal who wants to rob an apartment or a person will think a hundred times before doing so.

The apostles had two swords when they said to the Lord Jesus Christ, “Lord! here are two swords.” In response, Jesus said to them, “It is enough” (Luke 22:36-38). At that time, swords had been legally banned, and the Roman invaders only allowed the Jews to carry knives with small blades. So, for the apostles, these two swords were unlicensed weapons. But when people were going on a long journey, they took a sword with them in order to defend themselves against robbers. Of course, the Lord did not have to defend himself with the sword — He was the King of the World and could send legions of angels in defense of believers — but he allowed them to use weapons with the word “enough.”

Of course, a weapon must be registered, and a person who acquires the right to a weapon must not have a criminal background and be mentally healthy. The procedure for issuing a weapon license exists, and it works.

Of course there are people who will commit crimes. But such people are already able to do so, whether they have access to guns or not. We know that many domestic crimes against relatives, acquaintances, and relatives, are usually committed with knives.

Since ancient times, Christian people have performed special rites consecrating their weapons to the Lord. In order for the weapon to be used for its intended purpose, and for the Lord to protect the person, it is necessary to consecrate the weapon.

In addition, it is necessary to keep weapons in special safes so that they do not fall into the hands of unauthorized people, including children. It makes sense for police to verify the proper storage of weapons. 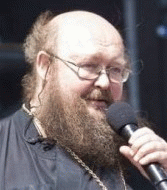 I am a supporter of the legalization of weapons. In the Russian Empire until 1917, any mentally normal person had the right to bear arms. Therefore, if a criminal planned to rape or rob someone, he knew that he could receive a bullet in the head from an otherwise peaceful person. Why can criminals commit lawlessness, yet peaceful people today cannot defend themselves? 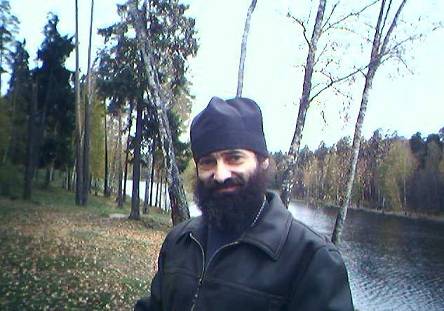 Of course, a Christian can and should protect himself with weapons, guided by civil laws. And these laws should be such as to contribute most to peace at home, public peace, and the eradication of crime. Here in Russia, unlike the United States, the discipline of possession and use of firearms has largely been lost. This only means that the restoration of the legal right to bear arms should not be hasty and fussy. 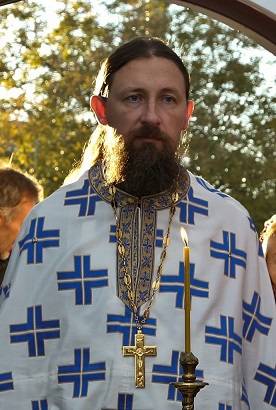 Is it possible to talk about a sufficient degree of responsibility if a person is devoted to drunkenness, does not keep Christian family values, does not respect anyone, and does not seek “the good of his neighbor”, and pursues only his own interests, sometimes being both mercenary and petty? Would not a weapon in the hands of such a person be a powerful means for realizing one’s ambitions and passions?

Considering the degree of de-Christianization in the overwhelming majority of our society, it seems to me that the legislatively fixed permission to own weapons (I do not mean hunting rifles, which people already own) can lead to an aggravation of social conflicts, to an increase in confrontations and hatred, especially in regard to the traditions of blood feud among some peoples in the Caucasus region.

In Western countries, the degree of a citizen’s responsibility finds its balance in the severity of the law, and in the historical tradition of enforcing the law. And in Russia, unfortunately, the traditional approach has been that “the law is like the wind: where it turned, there it went”. And current events — such as the recent criminal case regarding the embezzlement of funds in the Ministry of Defense, whose head until recently was Mr. Serdyukov — have persuaded me that our society still makes it overly easy for lawbreakers to avoid consequences for their actions. If we are going to allow the carrying of firearms, then we must ensure that the law governing the carrying and use of weapons is firmly enforced.

It is possible and necessary to protect oneself, relatives and friends, family and homeland with a weapon in case of threat or aggression. But there are two points. First, a proper culture of weapon ownership must be fostered: you must be able to use them in a way that does not bring harm to yourself or to others through negligence. Secondly, there is a spiritual and moral component. I would not like people to resort to weapons in everyday conflict situations. 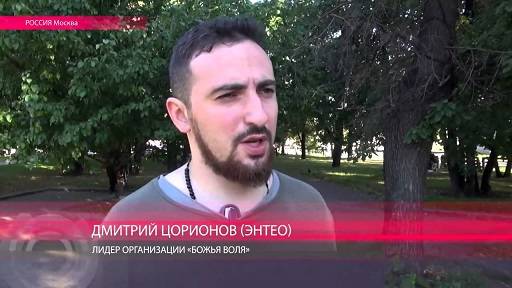 Founder of the social movement – “The Will of God”

I am a supporter of the right to free circulation of handguns. The Lord in the Gospel parable says the following words: “When a strong man with a weapon protects his house, then his property is safe.” It seems to me that genuine civil liberties are impossible without the right to arms, without the right to effective defense of their loved ones, houses, temples, and churches.

Christians should be able to defend themselves from criminals, and also from the hypothetical abuse of government power. Even if such a danger is not present today, no one can guarantee us future freedom from the horrors that our people underwent at the beginning of the last century, when the state confiscated guns from the people, took away their rights to gun possession, and then staged a massive terror. It is scary when criminals have weapons, but there is nothing scary about law-abiding citizens owning them.

The current ban on handguns does not deprive criminals of weapons. Rather, it deprives ordinary citizens of protection. Statistics say that the legalization of firearms dramatically reduces the occurrence of street crimes. It is true that tragedies sometimes happen. But in the USA, where weapons circulate freely in most states, the number of murders with firearms is less than with a conventional household hammer.

When criminals attack you and your girlfriend at night, why should you have to defend yourself with a mobile phone, providing them with 30 minutes to kill you, while you are waiting for help from the State? Why should an innocent girl be a victim, deprived of the right to defend her honor, when she is attacked by a rapist? Why can the government afford an armed guard, yet we cannot protect our own families?

Why can’t we protect ourselves from what happened in Kiev, when a minority of armed neo-Nazis seized power over millions of unarmed people? Why do we consider ourselves so irresponsible, that we do not allow adults and mentally healthy people to have handguns, which are the most effective and mobile means of self-defense? Why do we think that we are worse than Americans?

If our government does not give us the right to effective self-defense, it simply does not respect us. I do not understand how you can be called a citizen and not be able to acquire firearms. 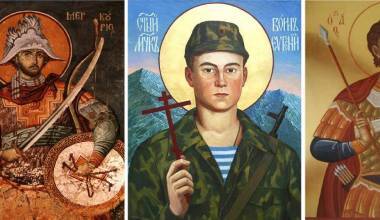 The center icon shows St. Evgeny with an automatic rifle hanging over his shoulder. The icons to the left and right are St. Mercurius, holding a sword, and St. Phanarios, holding a sword, spear, and arrows. These saints have been honored for centuries.

This website is how the Gleason family and the Silva family earn a living. Maintaining this website is a full time job, and this is how they feed their families. Both families now live in Russia, and they appreciate your support.

To keep the Russian Faith website running, a recurring donation of even $5 or $10 per month would be a huge blessing.