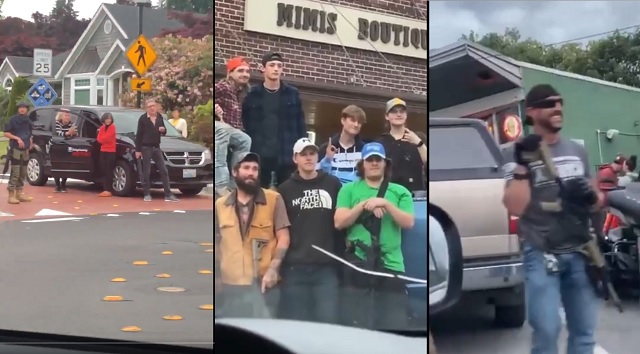 Leftists have been celebrating and cheering Black Lives Matter and antifa destroying other people’s neighborhoods for five days in a row but now they’re up in arms over some white guys defending their own towns from the roaming mobs.

This hilarious clip out of Snohomish, Washington was shared Sunday on Twitter by a leftist who lamented how the town was “trash.”

Some leftist uploaded this video from #Snohomish, WA on Sunday showing patriots defending their (riot free) town with guns.

He complained about how the town was “trash.”

He deleted it after it went viral and was praised by right-wing Twitter. 😂👌 pic.twitter.com/5i9ZoBSeHf

It ended up going viral on right-wing Twitter with people pointing out how awesome it looked and how there were no looters.

Another couple of leftoids shared video crying about the same scene later that night:

TRASH TRASH FUCK YOU #SNOHOMISH YOU ARE THE PROBLEM pic.twitter.com/TvPyobh4ZD

Here’s a video from Bellevue, Washington on Sunday evening showing a group of neighbors defending the entrance to their neighborhood with “LARGE GUNS.”

“All these white people, look at them with their guns,” the driver laments. “Look at that little boy, he’s a young man with a gun! He’s like 16!”

White men holding what looks like AKs? LARGE GUNS! This is in Bellevue right. Be careful! They look ready and hostile. Who are they? Children are with them! pic.twitter.com/Zo0w4WneO9

“This is a little residential area right near the rioters/ looters in Bellevue – right by my kid’s school. People in the burbs aren’t having it. And yes, even here in leftist democratic leaning Seattle – some of us believe in 2A,” Brian Lockhart said on Twitter.

BE CAREFUL! THIS IS IN BELLEVUE! This is real life! Two LARGE GUNS #seattle #bellevueprotest #blm #protest #blacklivesmatter pic.twitter.com/tTmRLnywgH

BELLEVUE AND SEATTLE PROTEST. These people have multiple guns. They are shouting “GO HOME AND BE SAFE! “ What do you think? #BLM #BLMPROTEST pic.twitter.com/8xX5zp4QQL

Lest anyone think this is merely performative, an armed cigar shop owner together with a partner in Bellevue on Sunday were filmed driving a large group of looters out of their shop in a dramatic scene:

The owner of a cigar shop caught some looters #Bellevue pic.twitter.com/KgyVjyIoMv

This is what it looked like before they showed up:

The looters trashed the place along with other adjacent businesses which were already reeling from the corona shutdown:

In Bellevue, @Karakostanich talks to a small business owner who like many are now doubly impacted, first from COVID-19, and second, from damage due to protests.

Bellevue police chief Steve Mylett it appears was too busy staging photo-ops and “taking a knee” with protesters to send cops out to respond (just like Art Acevedo in Austin).

Bellevue Chief of Police today. Other Chiefs need to follow & start having conversations instead of arresting and antagonizing!!! pic.twitter.com/sMbX1VmoY3