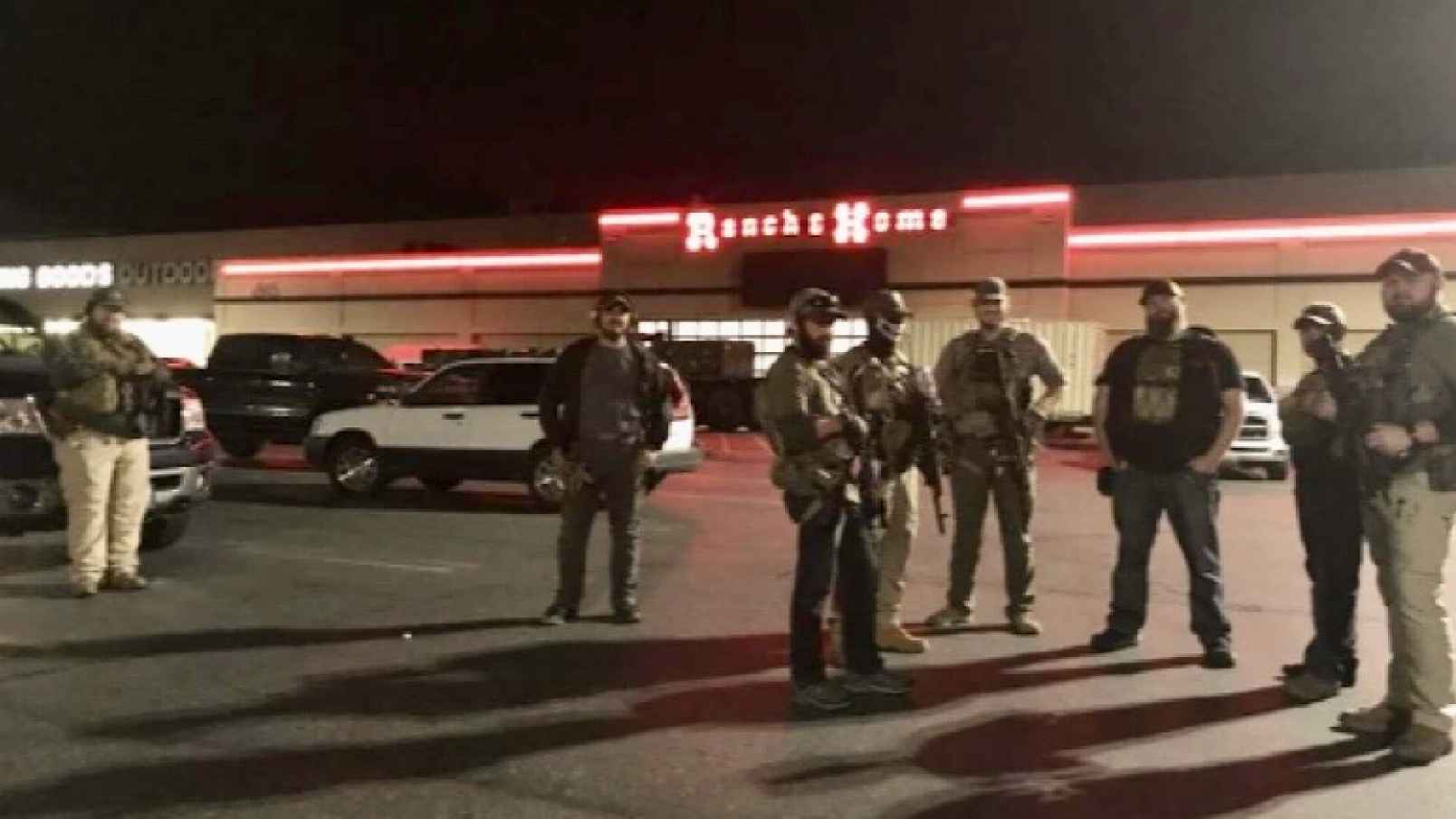 Where Troublemakers Decide to Make No Trouble

Why self-protection must remain non-negotiable.

Anyone who is troubled by the direction in which our country is moving is not likely to have their spirits lifted by Big Conservative media. And you know why.

From talk radio to Fox News to your average conservative publication, almost without exception Big Conservative media is replete exclusively with accounts of leftist outrages and double standards. Conservative media celebrities with enormous resources in money, influence, and connections—i.e. with the ability to organize a genuine, meaningful resistance to Anti-America—expend most of their energy increasing the anxiety levels of their audiences while dramatically decreasing their morale.

And when they do insist that American patriots “fight back,” short of instructing them to “vote Republican,” they supply absolutely zero direction as to how they can do so.

As a philosopher and a Christian who, upon having spent his adolescent years engaged in violence, reversed course in his early 20s to cultivate an appreciation for rational persuasion over intimidation and coercion, it brings me no pleasure to acknowledge that reason is most emphatically not an option when dealing with the irrational. Persuasion is not on the table if and when one must interact with the violent.

This is an election year. Come November, one way or the other, it’s more than a little bit likely that the environment is going to be quite different from what it is now. Nevertheless, the bottom line is this: until such time that more competent and resourceful individuals come along and organize patriots to do something other than vote Republican and donate to the Heritage Foundation, every freedom-loving American should train to defend — unto the death (preferably the death of those who would jeopardize innocents) — themselves, their loved ones, and their communities.

To be clear: violence is ugly. It is detestable. No decent, civilized human being should ever engage in it—unless and until the innocent are threatened by the violent.

And then? As USMC Lieutenant-Colonel Al Ridenhour put it, then you’ve just got to “kick that ass.”

This is a more or less flippant way of making the real point that “Colonel Al,” a martial arts instructor, tirelessly impresses upon his students. When physically (meaning imminently) threatened, one must marshal the will, the “ruthless intent,” to “kill the bad guys,” to turn the predator into prey.

Ridenhour is the veteran of over 100 combat operations and four tours of duty in Iraq and Afghanistan; an advisor to different state police departments and anti-terrorist units; a seventh degree black belt in the combat art of Guided Chaos; and the founder of the combat art of Warrior Flow and co-founder of the International Warrior Arts Association.

He is also my own Senior-Master Instructor.

Warrior Flow practitioners—and they are of various racial backgrounds and ages—are not trained to “fight.” They are trained along the same lines that Master Al trained the Marines under his command. Since real self-defense is “war in microcosm,” as American Combato founder Bradley Steiner memorably framed it, Warrior Flow students train to kill if they should have to go there.

The Right to Life is necessarily the right to remove from the planet any and all who would threaten it.

For this reason, Warrior Flow students don’t “spar.” They don’t train for “competitions,” to say nothing of the proverbial barroom brawl or “street fight.” They train for war, for confrontations—which they hope and pray should never transpire—with those who would be foolish enough to prey upon innocents in their presence.

Warrior Flow draws much inspiration from the undefeated 17th century Japanese Samurai warrior Miyamoto Musashi. “The ultimate aim of martial arts,” Musashi wrote, “is not having to use them.” But if one does need to use them? Then “your spirit must go to the extent of pulling the stakes out of a wall and using them as spears and halberds.” If one must use his training, then it is imperative to “attack with a feeling of constantly crushing the enemy from first to last,” to “attack with the spirit of terror and death,” to “crush your opponent’s courage and cause him to tremble,” and “not stop until the opponent is lying dead at your feet.”

I share all of this to be encouraging. I hope to instill in the demoralized a sense of empowerment, the empowerment that comes from knowing that you are not alone and that there are indeed people out there that are both able and willing to help you “find your way,” as Marine veterans and Warrior Flow instructors Mike McNulty and Kevin O’Leary, co-owners of Warriors Way Combatives, put it. Physical ability and the mindset of ruthless intent are assets that are within the reach of the decent who feel besieged at the moment.

There is, though, still more grounds for hope.

Not only are gun sales topping all-time highs, and not only are many of these purchases on the part of first-time gun owners who admit to being motivated by the spectacle of the savagery that has been visited upon dozens of cities, but, from coast to coast and in the thick of the riots, patriots of all racial, ethnic, and religious backgrounds have joined forces, armed up, and thwarted the wicked machinations of the Mob.

Below is a compilation of the accounts that I was able to find (though it was hard to keep up and there are undoubtedly more that slipped beneath my radar):

Not far away, rioters and looters trashed Center City Philadelphia and torched police vehicles. Yet the concerned citizens of the Fishtown and South Philadelphia sections of the city insured that the villainy didn’t affect their communities. Fishtown residents actually protected the police; meanwhile, over in South Philly, neighbors saw to it that neither their local Target nor their beloved Christopher Columbus statue met the fate of their counterparts in other locations.

In the Bronx, in an historically Italian-American community, neighbors were out on the streets and in the streets, with some issuing particularly vocal warnings at passing vehicles of would-be-troublemakers regarding the consequences that they would be made to face if they dared to execute their machinations in their community.

The troublemakers decided to make no trouble in this neighborhood.

Within hours, a group of 5,300 armed citizens calling themselves “Defend the Tri” assembled to defend businesses from looters in the Tri-Cities of Eastern Washington. They were there, with the blessing of local law enforcement, to simply supplement the efforts of the latter.

Snohomish, Washington saw armed patriots informing demonstrators that they expected for them to leave the town as clean as when they arrived. The crowd cheered and there were no incidences.

In Lynchburg, Virginia, rioters in the hundreds gathered around a restaurant. Police managed to show up, but they were outmanned. Armed locals, as well as the members of local militias, arrived and prevented the rioters from entering the premises.

In Minneapolis, during the first night of rioting and looting, a couple of self-proclaimed “armed rednecks” joined armed black business owners to help the latter.

In Missoula, Montana, “a concerned citizen who happens to be armed” and his equally armed friend were present at a demonstration to insure that there wouldn’t be any violence.

In Coeur d’Alene, Idaho, but thirty miles or so from the world’s newest state, CHAZ, numerous men and women patrolled the streets, on foot and by vehicle, to guarantee that no local demonstrators would visit the devastation to their town that had recently been inflicted upon so many others since the killing of George Floyd. Well, there was zero violence and, reportedly, the demonstrators and the concerned citizens expressed some good will toward one another.

The same, however, could not be said for some “Antifa” who ventured into Yucalpa, California and were whooped by the local townspeople.

Armed pro-Second Amendment rally attendees in Lewiston, Idaho were out protecting businesses. A BLM demonstration was held at the same time, and while there were a few words exchanged between the two groups, there was no violence and things remained unremarkable.

In Los Angeles, armed Jewish citizens stood guard outside of some synagogues to insure that they would not be vandalized as have other churches and synagogues during the BLM-related riots.

Over In New Mexico, an Hispanic man who was allegedly associated with a local militia that showed up to prevent the razing of a monument shot (non-lethally) one of the desecraters—but only after a mob attacked him and he tried retreating. Once they proceeded to beat him with a skateboard, he shot. The self-styled revolutionaries then…called for police. The shooter was charged.

The charge has since been dropped.

There were armed citizens in Tulsa, Oklahoma, Colorado Springs, Wyoming, and many more locations. All have insisted that they were there to merely protect innocents from harm and exercise their Second Amendment rights.

In Bethel, Ohio locals confronted demonstrators and, quite colorfully, warned them that, “This isn’t Seattle!” They also reminded them that theirs was a “Republican” town and that, in their town, “All lives matter!”

In New York City, the Dominicans chased out any would-be looters, using means that would have had them branded KKK or Aryan Brotherhood members had their skin complexions been lighter (here a guy from the neighborhood blasts “the liberal spin machine” and their consumers with the true account of what happened when “young blacks” revealed their intention to loot. His response to any and all who would pillage business owners in his community—“No;” “It ain’t going to happen;”—and to those who threatened to retaliate against the Dominicans for defending “Mom and Pop” shops—“If you’re going to do something, come do it”—should be the same response of all us who detest vandals).

As I’ve noted, violence is ugly and should only ever be used to frustrate the aspirations of the violent themselves. This being said, it can have a way of being abused even by the righteous. The abuses of violence are that much more likely to occur when it is not law-abiding citizens but outlaws who aren’t fond of the prospect of violence being visited upon them or their communities in the name of “anti-racism.” What follows are two examples of this phenomenon.

Upon reportedly threatening to wreak havoc in Placerville, California, Hell’s Angels and the Mongols, two outlaw biker gangs, prepared to meet head on any Antifa that dared to venture into the city.

In the Little Village section of Chicago, Latin Kings put the fear of God into troublemakers (supposedly, this includes, unfortunately, some blacks who had nothing to do with any of the mayhem that others were raining down upon other parts of Chicago). You can see here and here.

What all of the aforementioned examples, including the last two, illustrate is that, as I’ve argued in a past article, in the last analysis, fear, raw, primal fear, is a prime motivator. The Social Justice mobs in the streets no more want to die than any of us. Their targets are prearranged in order to preclude that outcome. When, however, they have reason to suspect that their decision to target one community or other could be all of the difference between their lives or their demise, they tend to choose more or less wisely.

In the meantime, the rest of us need to mind our business, be civil, avoid trouble, and always, always train to protect our lives, our loved ones, and our communities.