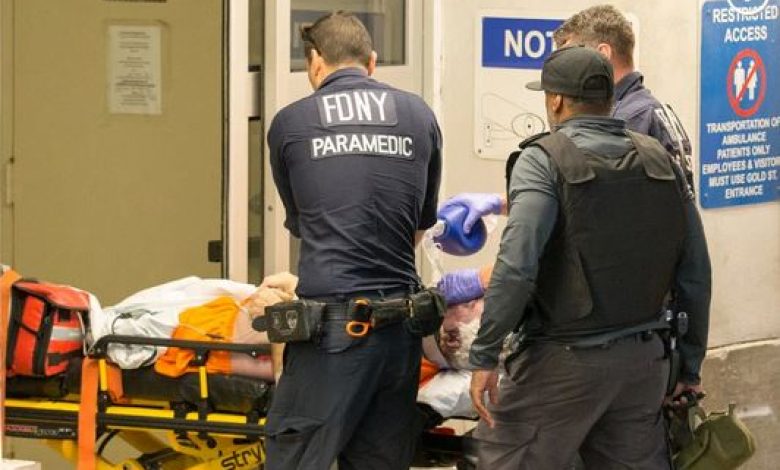 Guard claims Jeffrey Epstein was wheeled out of prison, alive

Originally published at Fellowship of the Minds, 9-30-2019l

On the morning of August 10, 2019, two weeks after billionaire convicted-pedophile (((Jeffrey Epstein))), 66, was placed on suicide watch after he had been found nearly unconscious in his cell with injuries to his neck from a supposed suicide-attempt, we were told Epstein was dead from “suicide” by hanging.

Around 7:30 a.m. that morning, a gurney carrying a man supposed to be Epstein was wheeled out of the Manhattan Correctional Center.

But as you can see in the comparison pics below, the gurney-man was not Jeffrey Epstein — the noses, hairlines, eyebrows and ears are different.

Not coincidentally, a day before Epstein’s “death-by-suicide,” some 2,000 documents were unsealed in Manhattan federal court, which reveal the names of dozens of powerful men, with some of whom Virginia Roberts Giuffre, who claims to be one of Epstein’s sex-trafficking victims, said she had been forced to perform sex acts. Epstein’s trafficked victims were as young as 14.

On September 19, 2019, on the Nutty Flavor Blog, a reader who calls herself ladyskipper102 claims Epstein did not die, but was wheeled out of the federal prison, alive, into a waiting van. She wrote:

I have taken a screen shot of a tweet that was only up for seconds before it was removed and never seen again from a guard allegedly on duty that night who said Epstein was wheeled out in a wheelchair, upright and alive, just after the 04:15am checks, and was taken away in a trip van that had a soldier escort in the back.

This tweet was posted at 08:41am day of by an anonymous guard who sounded to me like he was scared to death and afraid of being doxed who claimed to be a guard on duty that night who a) spoke to the tower guard who witnessed them leaving and said no doctors or ambulances arrived at all, b) they do not do transfers on weekends (this was Sunday) and c) no one logged in or out, no cars, no doctors, no medics. This guard who tweeted, not his buddy guard in the tower, also said he spoke with the medics on duty at the jail and none of them were called to rush to Epstein’s aid, and none of them logged in or out of the block to see any inmate.

The guards were fired I believe either later that day, or the next day, according to “the news”….

One more thing (sorry), the photo of Epstein’s body on a stretcher was proven to be faked. It was actually taken at a drill at a NYC fire station years before, as proven by the stretcher rack on the wall behind the gurney his body was supposedly on. Jails and hospitals do not have these racks with plastic stretchers stacked on their walls in the exits or ambulance bays, only fire stations have them. The head shot (side view) was shown to be an old photo of Epstein, inverted and stuck on the head of what was a CPR dummy. The head proportion is way too big for the body and would make him 7 or 8 feet tall….

Epstein is a 33rd degree mason and they are sworn by blood oath to protect their brothers no matter what, with no reservations whatsoever, no questions or qualms, even against murder charges. Lastly, he was more dangerous dead than alive, due to his blackmail schemes in his safes and in the crypts at his island, and I think that’s why only his address book, not his accounting, nor his date book nor receipts, nor damning photos, nor dna evidence, was published, to subvert and distract, but not to expose anyone for any crimes (pedos) specifically. And that’s why no one else has been arrested – he’s protected and the information he has is just too damning.

Read the rest at FOTM…