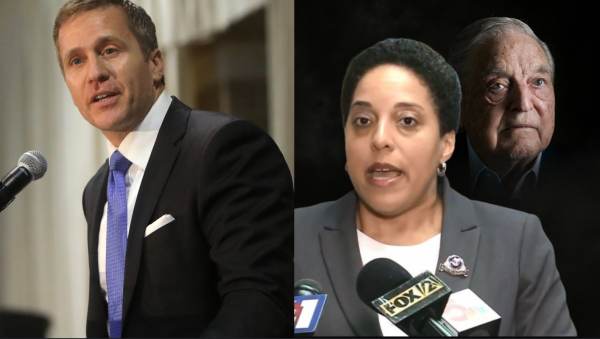 The chief prosecutor and Circuit Attorney for St. Louis, Kimberly Gardner, lost a major legal battle on Monday after a judge blocked her attempt to conceal documents that may reveal the nefarious measures she took to baselessly incriminate former Missouri Gov. Eric Greitens.

As the Gateway Pundit has previously reported, Gardner, a George Soros funded prosecutor, is under active criminal investigation for her alleged illegal efforts to prosecute Greitens in 2018, an endeavor that led to the rising Republican star’s resignation.

In July 2019, award-winning investigative journalist and founder of the publication Just the News John Solomon submitted a “sunshine law” request to obtain and publicly disclose all communications between Gardner, her staff and associates.

Like the Freedom of Information Act, Missouri’s “sunshine law” regulations require disclosure in government or business, an inspection of meetings, records, votes, deliberation and other official actions.  Under the law, exemptions from disclosing public records must be “strictly construed” to promote a public policy of transparency.

“The query sought the release of roughly two-and-a-half years’ worth of communications between Gardner, her staff, and numerous individuals such as George Soros, the Missouri Workforce Housing Association, state Representatives Stacy Newman and Jay Barnes, and others,” Just News reports.