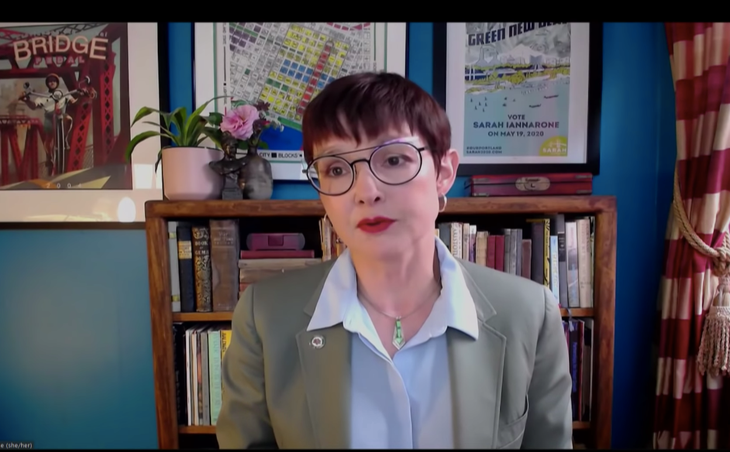 Sarah Iannarone, the self-described “antifa” candidate running against Portland Mayor Ted Wheeler, refused to condemn the violent antifa rioters attacking officers and threatening innocent bystanders on the streets of Portland. KGW Channel 8 Straight Talk host Laural Porter gave Iannarone, a member of the Democratic Socialists of America (DSA), a softball question, asking her to condemn the violence without denouncing the protests that give birth to nightly riots. Even so, she could not bring herself to condemn the violence.

“Police Chief Lovell is asking the community to denounce the late-night protests, the smaller group of protesters who are causing damage, setting fires, throwing bricks at officers. He and other black community leaders and activists say it’s taking away from the Black Lives Matter message,” Porter said. “He cited how people broke into the Justice Center, destroyed the first-floor interior, lit fires with people inside the building, there was looting and destruction. Another night, individuals screwed the doors of the North Precinct building shut, barricaded entrances, lit fires with people inside.”

“Nearby businesses, some owned by people of color, were damaged and looted. Some protesters have shot off commercial-grade fireworks, and Wednesday night … we saw more fires set outside the East Precinct,” Porter continued. “Do you denounce this kind of behavior, separate from the larger, more peaceful protests, Sarah?”

“They say an ounce of prevention is worth a pound of cure. I would have to go back prior to this uprising to work on the issues that are causing these folks to be angry in the streets, working on police accountability,” she said. “And so I know that nobody controls a social movement, and the mayor really isn’t the person to quell popular protests.”