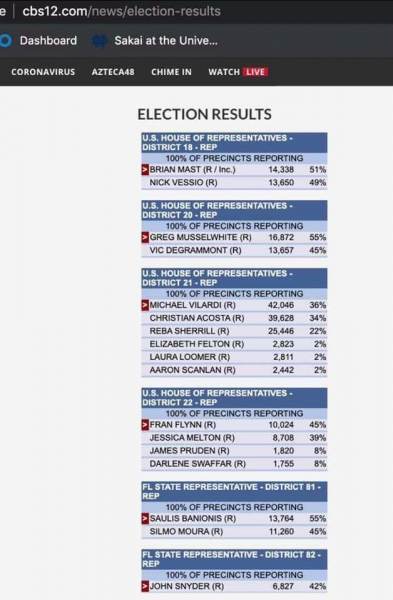 A South Florida CBS affiliate, CBS 12, posted the primary election results for over a half-dozen races last night to their website, days before the final votes are to be counted. Florida’s final absentee ballots and in-person election day voting occurs on Tuesday from 7am to 7pm. Despite this, congressional candidate Laura Loomer, who is running in the Republican primary to take on far-left career politician Lois Frankel, found herself shocked to see that 100% of precincts reporting their tallies late Sunday night.

The “results” showed the establishment candidates facing Loomer with a lion’s share of the votes and the journalist turned candidate barely snagging a few thousand votes. Given the fact that Loomer has built a massive volunteer army and raised over $1,000,000 and spent over $500,000 in the primary, those numbers are statistically impossible. However, if you are looking to suppress excitement among her very dedicated fanbase in the final hours of the election, posting “election results” like this would be one way to demoralize people into staying home and becoming hopeless.

CBS12, one of the major local news stations here in Palm Beach County where I’m running for Congress is actively engaging in VOTER SUPPRESSION on their website by posting fake election results! The election is on August 18th! Today is August 16th, yet CBS12’s website claims to have 100% reporting of all precinct votes!

TRENDING: BREAKING: 4Chan Identifies One of the Portland Rioters Who Attempted to Kill Driver as ‘Keese Love’