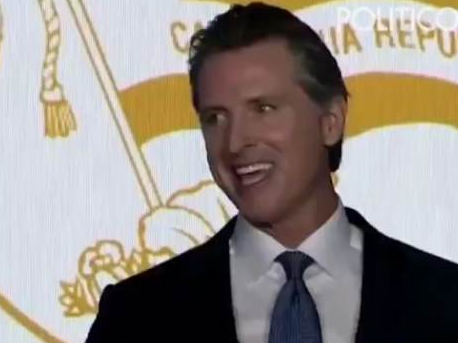 California Governor Gavin Newsom announced Wednesday that the state will ban sales of gas-powered vehicles, effective in 2035. Newsom said that the “audacious” goal was necessary to achieve the state’s goal of 100% renewable energy by 2045.

Newsom said that his new executive order would “eliminate” the sales of “internal combustion engines” and move to electric vehicles — a move that he said would create jobs and allow California to “dominate” the market, and address climate change. Those who currently own gas-powered vehicles would still be allowed to operate them and to sell them on the used market.

2035 happens to be the same year that former Vice President Joe Biden has set as a deadline for the U.S. to eliminate fossil fuels from electricity production, five years later than originally proposed by Rep. Alexandria Ocasio-Cortex (D-NY) in her “Green New Deal.” Ocasio-Cortez led the climate change panel on the “Biden-Sanders Unity Task Force” earlier this year.

Newsom cited ongoing wildfires, as well several recent record-breaking high temperatures in the state, in explaining his push for “ambitious goals” — though he did not explain how reducing local emissions would affect global climate enough to affect local temperatures. California currently emits 1% of the world’s carbon emissions despite being the sixth-biggest economy.

He called the new policy an “opportunity to transform” the state’s economy, and touted the global market for zero-emission vehicles. He did not explain why the state had to ban gas-powered vehicles rather than allowing the market to operate.