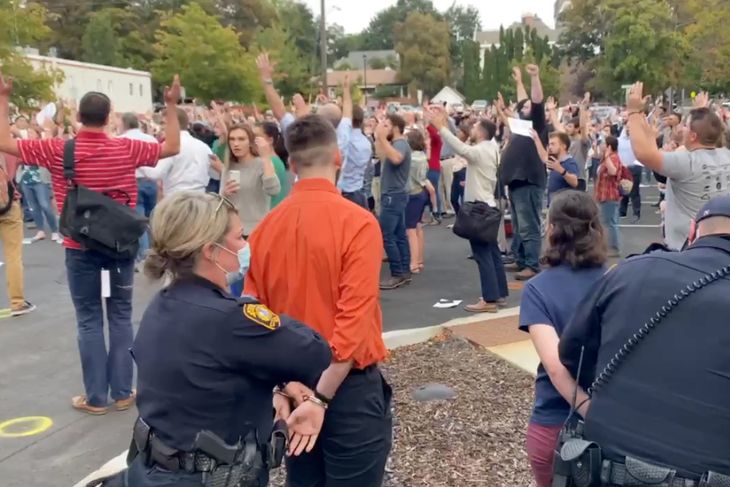 It seems Moscow, Idaho, is going the way of its Soviet namesake, arresting a group of unmasked Christians who had peaceably assembled outside the city hall to sing psalms and protest an extension of the city’s masking order.

On Wednesday, Moscow’s Christ Church, whose pastor is famed Christian theologian Douglas Wilson, announced that a “Psalm Sing” would be held outside city hall that afternoon.

We will be having a short Psalm Sing outside City Hall this afternoon, 4:45pm.

PSALM SING IN MOSCOW: A number of people are gathering at city hall this afternoon at 4:45 for what we are calling a “flash psalm sing.” We will sing three songs and the doxology, and then out. We are asking folks to please not wear a mask. We hope to do the same thing next Wednesday as well. This event was organized by Christ Church, but everyone is welcome.

On Tuesday, the city council extended the mandatory masking order, set to expire on October 6, until January, despite the fact there have been no deaths, or even hospitalizations, due to the COVID-19 virus in Latah County.

Wilson wrote at Blog and Mablog after the event, “This was not an assembly of scofflaws. It really was a peaceful protest, a petition to our city government for a redress of grievances, and a religious assembly, all in one. Everything about it was proper. We sang three songs and the doxology, and then went home.”

He pointed out that on the day the city council voted to extend the mask order, the mayor of Moscow presided over an outdoor wedding, where he did not wear a mask. Nor did a city council member who was allegedly in attendance.

According to local reports, more than 150 people were in attendance at the gathering to sing psalms and hymns—in beautiful four-part harmony, I might add—though Wilson believes the number was closer to 300, .

Fifteen minutes into the gathering—during the very first song—police began to arrest the peaceful psalm singers for failing to wear masks as mandated by the Moscow City Council.