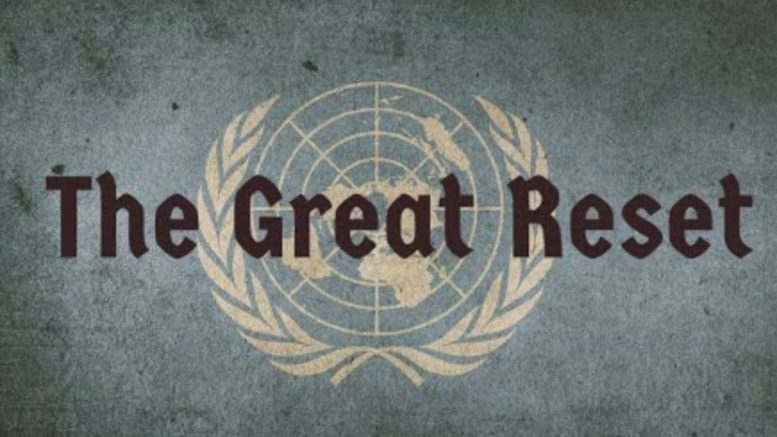 COVID-19 Lockdowns Are In Lockstep With The “Great Reset”

In October 2019, a pandemic simulation exercise called Event 201 – a collaborative effort between Johns Hopkins Center for Health Security, World Economic Forum, and Bill and Melinda Gates Foundation – concluded that a hypothetical new coronavirus may end up killing at least 65 million people worldwide within 18 months of an outbreak.

When COVID-19 coincidentally emerged from Wuhan two months later, scientists were rushing to generate similar alarmist forecasts using a variety of questionable scientific models. Researchers from the Imperial College London, for instance, approximated death tolls of 500,000 (UK) and two million (USA) by October this year. To those following the metastasis of the global vaccine mania, the Imperial model was predictably “tidied up” with the help of Microsoft.

While scientific models are admittedly fallible, one would nonetheless be hard-pressed to justify the endless string of contradictions, discrepancies and wilful amnesia in the global pandemic narrative. In fact, one should question whether COVID-19 even deserves the tag of a “pandemic”. According to the United States’ Centre for Disease Control (CDC), the updated age-group survival rates for COVID-19 happen to be: Ages 0-19 (99.997%); 20-49 (99.98%); 50-69 (99.5%); and 70+ (94.6%). The mortality rates are only slightly higher than the human toll from seasonal flu and are, in fact, lower than many ailments for the same age cohorts.

If the CDC statistics don’t lie, what kind of “science” have we been subjected to? Was it the science of mass-mediated hysteria? There are other troubling questions yet unanswered. Whatever happened to the theory of bats or pangolins being the source of COVID-19? Who was Patient Zero? Why was there a concerted media agitprop against the prophylactic use of hydroxychloroquine that was backed by the Indian Council of Medical Research (ICMR) no less? And why did Prof Neil Ferguson, who had led Imperial’s contagion modelling, repeatedly breach lockdown measures to meet his paramour – right after his recommendations were used to justify draconian lockdowns worldwide which continue till today?

Most damning yet, why are Western media and scientific establishments dismissive of Russia’s Sputnik V vaccine? After all, Moscow’s credibility, both scientific and otherwise, is on the line here. In a real pandemic, nobody would care where an effective remedy comes from. The virus does not care about borders and geopolitics; so why should we politicize the origins of an antidote?

Perhaps what we are really dealing with here is a case of mass “coronapsychosis” as Belarussian President Alexander Lukashenko aptly called it. Who benefits from global lockdowns that are destabilizing all facets of our society? The following four “great” undercurrents may provide a clue.

As the author had warned for more than a decade, the world is staring at a confluence of risk overloads, socioeconomic meltdowns (1) and a Second Great Depression. For the ruling classes, COVID-19 is fortuitously deflecting public attention away from the disastrous consequences of decades of economic mismanagement and wealth fractionation. The consolidation of Big Tech with Big Media (2) has created an Orwellian world where collective hysteria is shifting loci from bogeymen like Russia to those who disagree with the pandemic narrative.

We have entered a “new normal” where Pyongyang, North Korea, affords more ambulatory freedom than Melbourne, Australia. While rioting and mass demonstrations by assorted radicals are given a free pass – even encouraged by leaders in the West – Facebook posts questioning lockdowns are deemed subversive. This is a world where Australian Blueshirts beat up women, manhandle a pregnant woman in her own home, and perform wolf pack policing on an elderly lady in a park. Yet, the premier of the Australian state of Victoria remains unfazed by the unflattering moniker of Kim Jong Dan.

The corona-totalitarianism is unsurprisingly most pronounced in the Anglosphere and its dependencies. After all, these nations are staring at socioeconomic bankruptcies of unprecedented proportions vis-à-vis their counterparts. Even their own governments are being systematically undermined from within. The US Department of Homeland Security, created in the aftermath of 9/11 to combat terrorism, is now providing $10 million in grants to organizations which supposedly combat “far-right extremism and white supremacy”. This will further radicalize leftist malcontents who are razing US cities and its economies in the name of social justice. There is, however, a curious rationale behind this inane policy as the following section illustrates.

While the circus continues, the bread is thinning out, except for the Top 0.001%. Instead of bankruptcy, as recent trends indicated, Silicon Valley and affiliated monopolies are notching up record profits along with record social media censorship. US billionaires raked in $434 billion in the first two months of the lockdown alone. The more the lockdowns, the more the wealth accrued to the techno-elite. As tens of millions of individuals and small businesses face bankruptcy by Christmas, the remote work revolution is gifting multibillion dollar jackpots to the likes of Jeff Bezos (Amazon) and Mark Zuckerberg (Facebook). Azure (Microsoft) and AWS (Amazon) cloud eco-systems, among others, have expanded by 50% since the beginning of the pandemic.

In the face of such runaway wealth fractionation, panoptic contact tracing tools from Big Tech are increasingly employed to pacify restive populations. And of course, to prevent a second, third or Nth wave of COVID-19 for our collective good!

In the meantime, Big Banks, Big Pharma, Big Tech and other monopolies are getting lavish central bank bailouts or “stimulus packages” to gobble up struggling smaller enterprises. COVID-19 is a gift that never stops giving to a select few. But how will the techno-oligarchy maintain a degree of social credibility and control in an impoverished and tumultuous world?

Oligarchic philanthropy will be a dominant feature of this VUCA decade (3). According to a recent Guardian report, philanthropic foundations have multiplied exponentially in the past two decades, controlling a war chest worth more than $1.5 trillion. That is sufficient to bankroll a horde of experts, NGOs, industry lobbies, media and fact-checkers worldwide. Large sums can also be distributed rapidly to undermine governments. The laws governing scientific empiricism are no longer static and immutable; they must dance in tandem with the funding. Those who scream fake news are usually its foremost peddlers. This is yet another “new normal” which had actually predated COVID-19 by decades.

The Bill and Melinda Gates Foundation (BMGF) is a prime example of how oligarchic philanthropy works. Since 2000, it has donated more than $45 billion to “charitable causes” and a chunk of this is designed to control the global media narrative. The Guardian, rather tellingly, credits the BMGF for helping eradicate polio despite contrary reports of wanton procedural abuses, child death tolls and poverty exploitation which routinely mar the foundation’s vaccination programs. Bill Gates even interprets vaccine philanthropy in terms of a 20-to-1 return on investments, as he effused to CNBC last year.

As for the BMGF’s alleged polio success, officials now fear that a dangerous new strain could soon “jump continents”. After spending $16 billion over 30 years to eradicate polio, international health bodies – which work closely with BMGF – have “accidentally” reintroduced the disease to Pakistan, Afghanistan, and Iran.