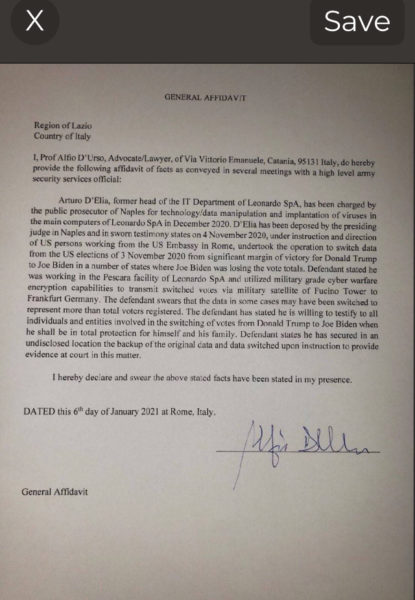 This affidavit details how it was done. Given the roots of far-left ideologues and saboteurs in the US government, and the furious resistance President Trump received from the federal bureaucracy when he tried to implement America-First policies, there is nothing remotely implausible about this.

Listen to the additional audio testimony.

Arturo D’Elia, former head of the IT Department of Leonardo SpA, has been charged by  the public prosecutor of Naples, for technology data manipulation and implantation of viruses in the main computers of Leonardo SpA in December, 2020. D’Elia has been deposed by the presiding judge in Naples, and in sworn testimony states on for November 2020 under instruction and direction of us persons working from the US Embassy in Rome undertook the operation to switch data from the US elections of three November 2020 from significant margin of victory for Donald Trump to Joe Biden in a number of states where Joe Biden was losing the vote totals. Defendant stated he was working in Pescara facility of Leonardo, and utilized military grade cyber warfare encryption capabilities to transmit switched roads. The military satellite of Fucino tower to Frankfurt, Germany period, the defending swears that the data in some cases may have been switched to represent more than total voters registered. The defendant has stated he is willing to testify to all individuals and entities involving in the switching of votes from Donald Trump to Joe Biden, when he shall be in total position for himself and his family. Defendant states he has secured in an undisclosed location, the backup of the original data and data switched upon instruction to provide evidence at court in this matter.

*Leonardo S.p.A., formerly Leonardo-Finmeccanica and Finmeccanica, is an Italian multinational company specialising in aerospace, defence and security. Headquartered in Rome.