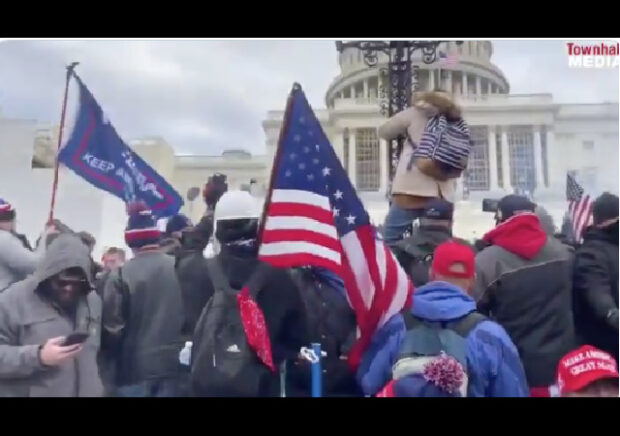 NYU Prof: Black and Latino Trump Supporters at Capitol are a Product of ‘Multiracial Whiteness’

Cristina Beltrán teaches at New York University. In a recent column, she focused on black and Latino Trump supporters at the Capitol last week.

She suggests this is based on “multiracial whiteness.”

For the left, there is only one explanation for everything. Racism. Even if that means somehow transforming black and Latino Americans into white people.

To understand Trump’s support, we must think in terms of multiracial Whiteness

The Trump administration’s anti-immigration, anti-civil rights stance has made it easy to classify the president’s loyalists as a homogenous mob of white nationalists. But take a look at the FBI’s posters showing people wanted in the insurrectionist assault on the U.S. Capitol: Among the many White faces are a few that are clearly Latino or African American…

One of the organizers of the “Stop the Steal” movement is Ali Alexander, a Trump supporter who identifies as Black and Arab. The chairman of the neo-fascist Proud Boys is Enrique Tarrio, a Latino raised in Miami’s Little Havana who identifies as Afro-Cuban; when he arrived in Washington for the Jan. 6 march, he was arrested for allegedly burning a Black Lives Matter banner taken from a Black church the month before.

What are we to make of Tarrio — and, more broadly, of Latino voters inspired by Trump? And what are we to make of unmistakably White mob violence that also includes non-White participants? I call this phenomenon multiracial whiteness — the promise that they, too, can lay claim to the politics of aggression, exclusion and domination.

She offers a fuller explanation of multiracial whiteness here: