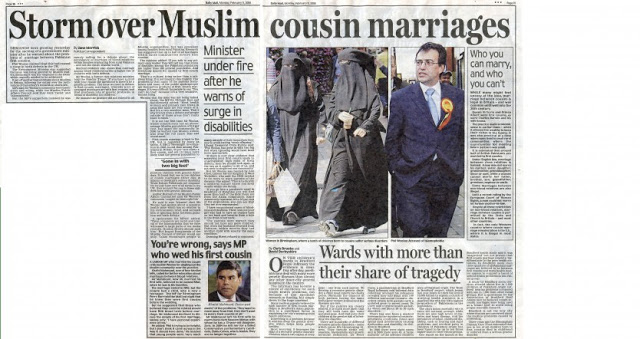 When Westerners complain about cousin marriage among Muslims they invariably point to the health risks. They don’t emphasize that numerous cultures throughout history have mandated their children to wed close relatives because it strengthens ingroup loyalty and ensures that every member in the group “stays in line” and adheres to their traditions. They don’t understand that Muslims are healthily in tune with their ingroup identities, not the benefits of “humanity”. Whites are the ones who are unhealthily allowing millions of ingroup Muslims into their nations.

Muslims are raised to trust their own only. This is what Harvard professor Joseph Henrich has discovered. On the basis of data from the World Values Survey covering 75 countries, he reports in chapter 6 of his book, The WEIRDest People, that the greater the intensity of kinship, as measured particularly by degree of cousin marriage, the less trust individuals will have for “people they have just met, foreigners, and adherents of other religions”.
Think about the millions of immigrants coming to the West from African and Muslim countries where cousin marriage is common. Now think about the following findings by Henrich:
These results hold true independently of the family income and the degree of government largesse to immigrants. Even though the “universalizing religion” of Islam did develop ethical codes applicable to all believers regardless of lineage, the sense of identity and loyalty of people raised in tight kinship groups will still be more firmly tied to their blood lineage than to their religion or nation.
Islam is durable in the face of modernity because it has remained rooted in old tribal ties with its strong support for polygamy and cousin marriages—in complete contrast to Christianity. Forget the endless debates about how the religious meaning of this or that passage in the Koran influences Muslim behavior. It comes down to the way Islam has remained rooted in marriages between individuals who are closely related.
Meanwhile, Europeans trust foreigners, and believe that Muslims are no different from them as long as they learn to treat them with impartial fairness. It is not that the Bible tells them to believe this. It is that Christianity destroyed the kinship ingroup identities and “family loyalties” of Europeans. Henrich compiles a highly substantial amount of evidence showing that those national populations in Europe that were under the influence of the Church’s family program (in favor of monogamy against cousin marriage and polygamy) for the longest duration from 500 CE to 1500, tend to be today: less in-group oriented, less tightly bound to traditional norms, more individualistic, less distrustful of strangers, highly inclined to believe in impartial notions of fairness, more willing to contribute to the public good, and more honest  in their dealings with strangers.
Can Muslims change? We know that Henrich does not argue that these psychological differences are “fixed or essential differences” rooted in genetics. Humans are cultural beings naturally selected to “adapt and calibrate [their beliefs and behaviors according] to the culturally-constructed environments” they confront, “especially while growing up”. But neither does Henrich argue that one can easily recalibrate the psychology of humans simply by giving them new classroom lectures, new reading materials, or transporting them to a new cultural environment.
The psychological differences between WEIRD and non-WEIRD people are ontogenetic or deeply anchored within their psyche. Henrich offers some very revealing data showing that immigrants from intensive kinship backgrounds persist in their ingroup behaviors even when their income and education rises in the West. Immigrants “coming from places with more intensive kinship continue to care more about in-group loyalty and less about non-relational morality” (210). 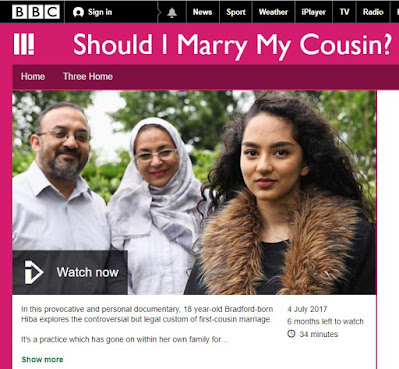 Even more revealing is the data he provides in chapter 7 in a section titled “The Children of Immigrants”. It is worth quoting in full his summation of “the results…from the European Social Survey from roughly 14,000 second-generation immigrants spread across 36 countries”:

individuals whose parents came from countries with higher Kinship Intensity Indices or more cousin marriage were more conformist-obedient, less individualistic-independent, and less inclined to trust or expect fair treatment from strangers. These relationships remain strong even after statistically accounted for differences in income, education, religious denominations, religiosity, and even people’s personal experience of discrimination…The consistent and robust impact of historical kinship intensity on the psychology of second-generation immigrants reveals than an important component of these psychological effect is transmitted from one generation to the next, and not simply due to people’s direct exposure to poor government, social safety nets, particular climates, endemic diseases, or oppression by the native population in the immigrant’s new home. Rather, these psychological differences persist in the adult children of immigrants both because migrants recreate the intensive-kin-based institutions found in their countries of origin (e.g., arranged marriages with cousins) and because particular ways of thinking and feeling are learned from parents, siblings, and those in newly formed social networks. Culturally transmitted aspects of psychology can persist long after the actual kinship practices related to polygyny, cousin marriage, and clans have disappeared (244).

In a footnote to this passage Henrich informs us that cousin marriage has actually increased “among immigrants to WEIRD societies such as Britain and Belgium,” including among second generation immigrants, “compared to the home country”.

In Britain, one study shows that cousin marriages were 76 percent of all marriages for second-generation Pakistani Brits, while in Pakistan comparable rates were under 50 percent. In Belgium, first generation migrants from Morocco and Turkey also had higher rates of cousin marriage compared to their counterparts back home, though by the second generation, rates were only a little higher than those found in the home country (546).

Henrich also brings up results from an experiment, “Public Goods Game,” designed to measure whether individuals are willing to act “in the interests of their broader communities” by giving time, money, and effort to such public goods as voting, donating blood, joining the army, reporting crimes, following traffic laws and paying taxes. The results, again, are that WEIRD individuals are far more inclined to act in the interests of the public good, whereas individuals from kinship intensive cultures, including immigrants, identify the public good with their own ingroup.

It looks like Pakistani immigrants have been sexually grooming thousands of British girls for decades because they view these girls with their WEIRD trust for strangers as “easy meat” to be ruthlessly exploited and manipulated.

Henrich makes the obvious point that “society benefits when more people” contribute to the public good. So why did Henrich tweet recently that “every time you turn up immigration you turn up innovation“? Why did he write recently an article on the benefits of Mestizo, African, and Muslim immigration?

In past interviews Henrich has avoided calling himself a liberal or conservative when asked about his political views. However, since the publication of The WEIRDest People he has started acting like a good progressive. Henrich’s interpretation of the rise of the West is potentially very damaging to the leftist narrative that Europeans created the modern world on the backs of slaves and indigenous peoples. It says that, since the Middle Ages, Europeans have shown themselves to have a greater capacity for “self-control,”, “time thrift,” “hard work,” “trust, fairness, honesty,” “reduced ingroup favoritism,” “impartial principles” and “analytical thinking”. 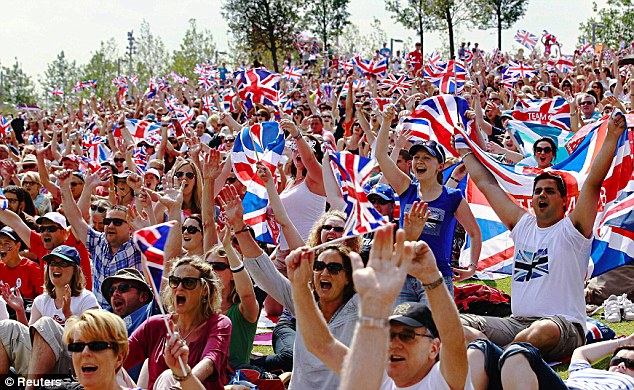 But Henrich operates within a Western ideological landscape dominated by a left-right globalist coalition seeking to destroy the national identities of Europeans. He knows that in all societies, including individualist Western societies where critical thinking is supposedly encouraged, there are very strong social pressures for individuals to internalize the “socially accepted norms”. Today, those who violate the culturally-mandated norm of diversity are punished.

Henrich may pretend that this norm is consistent with the norms of a WEIRD culture and the values of free choice and non-conformity. But this is not true. The already super WEIRD West was very nationalistic some decades ago. Nationalism was indeed a new ideology calling for a new collective identity among WEIRD Europeans as a substitute for older tribal identities. Cultural Marxism was a new ideology concocted after WWII by a hostile elite against European nationalism. A truly WEIRD Western world would allow individual choice and critical thinking over the problems Africans and Asians from kinship societies are causing in the Western world.

Henrich seems naively unaware how much the West has changed in the last few decades; how much, as we will see in future commentaries, the WEIRD monogamous nuclear family has been damaged by cultural Marxist actions. He is certainly unaware of the ways in which the demolition of kinship based norms opened the door to intense ideological struggles within the West about the values we “free individuals” should live by. He does not know that nationalism was part of this ideological struggle, and that cultural Marxists have taken over, and that they mean to destroy many of the WEIRD traits of European peoples.

The power of cultural Marxism is such that Henrich is beginning to argue (and does clearly suggest in the closing chapters of his book) that in order to produce “WEIRDer psychologies” the West should promote “residential mobility” and porous national borders. Whites, apparently, are still too attached to their nations, ethnicities, and religions. They need to let go of any remaining “in-group” nationalist favoritism.

He wants his readers to assume that WEIRDness must inevitably and progressively result in globalism.  He is wrong. There are numerous ways in which nation-states can interact with each other according to impartial principles without opening their borders to immigration replacement. Whites can create pan-European connections and solidarities with a much higher appreciation for the public good than will ever be possible with millions of kin-oriented immigrants with alien loyalties.