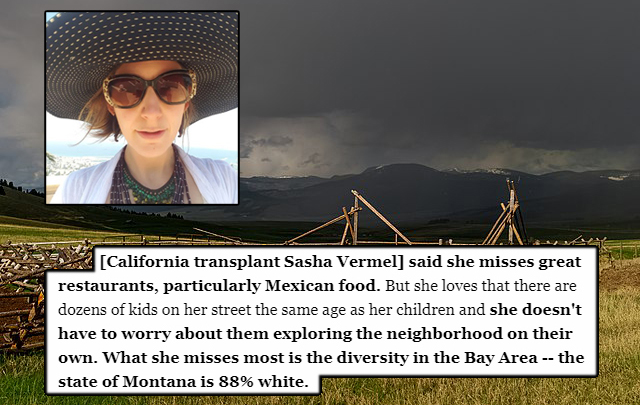 Californians Flee to Montana in Droves, Seek to Turn It Into California

Californians are fleeing the crime-infested third world s-hole they voted for and moving to Montana so they can repeat the process all over again.

From SF Gate, “Californians are arriving in Montana in droves. But they’re not welcome.”:

Even in 2019, Carolyne Calvin, a realtor with Keller Williams Montana Realty, said 85% of her buyers were from out of state. Just in 2021 so far, Calvin said the market in and around Bozeman has been so frantic, she’s sold at least 12 homes sight unseen. Those moving from places like Texas, Seattle and the Bay Area know how hot the housing market is, and they don’t have time to come into town every time they want to see a property. She said that while it’s good for business and those that want to sell their home, she feels badly for local buyers that are getting priced out of the immediate market and have to go out to outlying areas.

As with most moves, there are trade offs for those migrating from the Bay Area. [California transplant Sasha Vermel] said she misses great restaurants, particularly Mexican food. But she loves that there are dozens of kids on her street the same age as her children and she doesn’t have to worry about them exploring the neighborhood on their own. What she misses most is the diversity in the Bay Area — the state of Montana is 88% white.

Lance Trebesch, CEO of Eventgroove, said diversity seems like it’s actually gotten slightly better since he moved to Bozeman 17 years ago from the Bay Area, but he believes the city and state still have a long way to go. Hopefully, the growing tech community, coupled with an emerging remote workforce, should help.