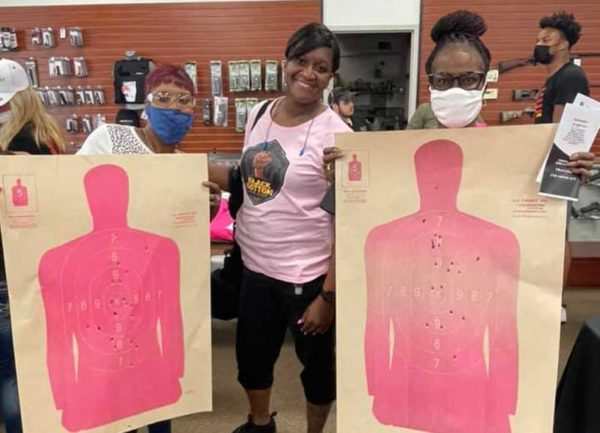 by F Riehl, Editor in Chief

Detroit –  -(AmmoLand.com)- Firearm instructors and range safety officers from southeast Michigan, along with a cadre of counterparts from 11 other states, recently came together in late August to give free shooting lessons to 1,000 women. The annual program, now in its tenth year of operation, was the brainchild of Rick Ector. Ector is a National Rifle Association (NRA) appointed Training Counselor and credentialed Chief Range Safety Officer.

Ector launched the program after watching a local news story in 2012 in which it was disclosed that a woman was brutally attacked, raped, and murdered. Ector convinced a handful of fellow local firearm trainers to join him in providing free shooting lessons for women. The first iteration of this annual program, publicized solely via social media posts, trained just 50 women.

Over the last 10 years, the program has experienced steady growth. Last year, the program experienced its current high watermark for popularity. In 2020, almost 2,000 women were trained in fundamental firearm safety, given a range safety briefing, and were given a free 20 round shooting lesson with a 9mm pistol in a two-day window.

In addition, the annual training program for women is gaining national attention. As a result, firearm trainers from the following states donated their time to this year’s event: CA, FL, GA, IL, IN, MO, NE, OH, PA, TX, VA, and WI. Ector hopes that his program is used as a model for expanding firearms education to interested women all over the United States.

Last month, during the weekend of August 21st and 22nd, participation fell to 1,000 participants in the two-day event. Ector attributed the change in participation to be due to a number of factors, including the fact that the geographical region is no longer under lock-downs, citizens have a greater choice of activities to enjoy such as the “Woodward Dream Cruise,” firearm inventories are at higher levels in local gun shops, families are now able to enjoy trips and vacations, and parents are focused on their children returning back to the classroom.

Ector plans to move the timing of his annual shooting event to a more schedule-friendly time period in 2022. He feels that attendance will bounce back, as a result. The program was only recently moved to August in 2020 due to metro-Detroit communities being shut down due to Covid concerns.