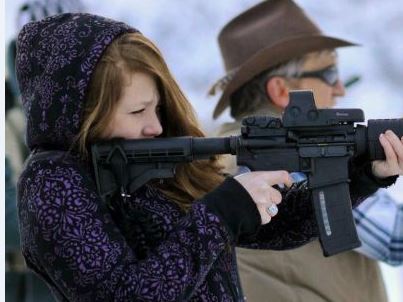 Liberals will most definitely look at the “Americans are heavily armed” portion of the headline and screech “they are threatening to shoot us all!!!”, as their propensity for dramatics and hyperbole is the reason they insist on having “safe spaces,” and “trigger warnings,” but a look at why America has the Second Amendment in the first place, shows this is not a threat, but a warning against the wannabe tyrants and dictators here in America.

The following description of  the Second Amendment and why it exists, should be kept in mind as we look to Australia and their draconian and dictator-like restrictions and enforcement methods using their military to strip their citizen’s rights of choice from them, and the ways that America is following in their footsteps.

Canada is just about on par with the tyranny being seen in Australia, and the rapid rate that American federal and state leadership is trying to mimic them, shows clearly why the Second Amendment is so important now.

THE PURPOSE OF THE SECOND AMENDMENT

“A well regulated Militia, being necessary to the security of a free State, the right of the people to keep and bear Arms shall not be infringed.”

• The Second Amendment is part of the US Bill of Rights.

• It gives the right to bear arms in the US, especially for the organization of state militias.

• The right to bear arms was originally seen as a check against the potential tyranny of the new Federal government as well as foreign invasion.

• In the 20th and 21st centuries, there have been conflicts between collective and individual interpretations of the amendment.

• Recent Supreme Court rulings have leaned towards the individual right to bear arms outside of a militia for other legal uses.

The Amendment was added to the constitution for the purpose of protection, including and to some, specifically, against a tyrannical, power-abusing, politicians and local and federal government leaders.

Again, it is not a threat to highlight the fact that we are armed, and willing to protect ourselves, exactly as intended by the Second Amendment, but rather a warning to power-hungry liberals that Americans are more than capable of fighting back should they be pushed too far.

THE NIGHTMARE IN AUSTRALIA COMING TO AMERICA

In Australia the Army and Navy has been brought in under the guise of helping “fight” the COVID pandemic, yet the nightmarish reports coming out, indicate they are enforcing medical martial law.

On July 7, 2021, we saw a report asking “Why is an army general running Australia’s vaccine rollout?”