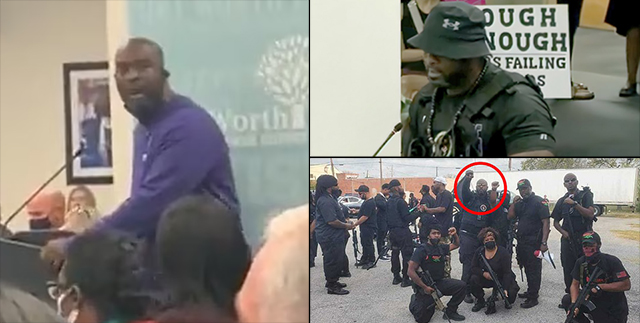 ‘I Got Over 1,000 Soldiers Ready To Go, Locked And Loaded’: Black Militant Threatens Anti-CRT Parents At Texas School Board Meeting

A black militant threatened parents opposed to anti-white brainwashing in public schools at a school board meeting in Fort Worth, Texas by telling them he’s got “1,000 soldiers ready to go” and they’re going to come back “locked and loaded.”

Pro-critical race theory activist Malikk Austin tells Fort Worth parents that he has “over 1,000 soldiers ready to go” and that they will come “locked and loaded” to the next meeting. Austin is a former member of the The Brotherhood black militia group.pic.twitter.com/X1pspzsXvM

If the @FBI and @TheJusticeDept do not launch an immediate investigation, it proves that Garland’s actions were purely political—an attempt to protect the teachers unions and silence, intimidate, and smear anti-critical race theory parents. He should resign.

In the Fort Worth Independent School District board meeting on Nov. 9, Malikk Austin turned to address the parents who had spoken up about critical race theory.

“For those who got an issue with this critical race theory equity, this is something I fight for, for my children,” Austin, who is African American, began. “How dare you come out here and talk about the things that my daddy and my grandparents went through, the lynching, the oppression, Jim Crow, and my kids are still being afflicted by this.”

full story and video at https://www.informationliberation.com/?id=62672