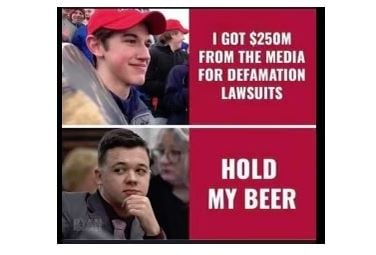 A Wisconsin jury found 18-year-old Kyle Rittenhouse NOT GUILTY of all charges this afternoon in Kenosha.

This will come as a complete shock to any remaining Americans who trust the fake mainstream news as their source of information.

The liberal fake news media convicted Kyle Rittenhouse in the court of (their) public opinion last year. To the fake news and Joe Biden, Rittenhouse was a white supremacist and mass murderer who went to Kenosha with the intent to kill peaceful protesters.

This was a lie. It was always a lie. And today justice was served.

And now the fake news is in a collective panic.
They lied about Kyle Rittenhouse for a year. As the crazed Rev. Wright once said, “The chickens are coming home to roost.”