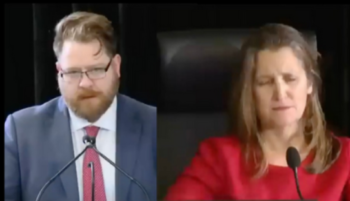 An estimated 50,000 Canadian truckers traveled across Canada in a massive caravan protesting the COVID mandates. Canadian media tried to paint the protests as Russian propaganda.

Canadian Prime Minister Justin Trudeau unleashed his authoritarian leadership on Canadians who dared to push back against the government, including arresting two leaders of the Freedom Trucker convey protest in Ottawa.

Trudeau employed the Emergencies Act and utilized the near-limitless powers to terrorize and harass the grassroots trucker convoy protests.

While the Canadian Parliament initially  voted to uphold Trudeau’s unprecedented use of the Emergencies Act against the truckers, he was forced to revoke it days later, likely due to lack of support in the Senate.