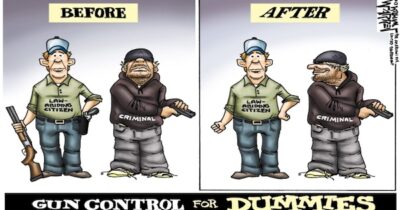 Twenty-year-old Ronald Jackson Jr. allegedly shot a Chevron station clerk to death in Antioch, California, Saturday but is facing no murder charges over the incident, the district attorney noting that because the suspect was shot at while fleeing, his shooting back was self-defense.

KTVU reports that 36-year-old James Williams was the clerk at the Chevron station “on Contra Loma Boulevard when the violence broke out about 2 a.m. Saturday.”

A robbery suspect, 20-year-old Ronald Jackson Jr., ran out of the store and Williams chased him, then opened fire. Jackson was hit and fell to the ground and “Williams [allegedly] continued shooting and that’s when Jackson allegedly returned fire, killing Williams.”

NBC News reports that there was another suspect with Jackson, and that Williams chased both of them. The Contra Costa County district attorney’s office weighed the circumstances in which Williams was fatally shot and chose not to pursue murder charges against Jackson, viewing his actions as self-defense.

District Attorney Diana Becton released a statement on the decision, saying, “In the eyes of the law, Mr. Williams’ actions ceased to be self-defense when Mr. Williams pursued Mr. Jackson and the other suspect with a firearm — and continued to pursue Mr. Jackson after he shot him.”

AWR Hawkins is an award-winning Second Amendment columnist for Breitbart News and the writer/curator of Down Range with AWR Hawkins, a weekly newsletter focused on all things Second Amendment, also for Breitbart News. He is the political analyst for Armed American Radio and a Turning Point USA Ambassador. AWR Hawkins holds a PhD in Military History with a focus on the Vietnam War (brown water navy), U.S. Navy since Inception, the Civil War, and Early Modern Europe. Follow him on Instagram: @awr_hawkins. You can sign up to get Down Range at breitbart.com/downrange. Reach him directly at [email protected].