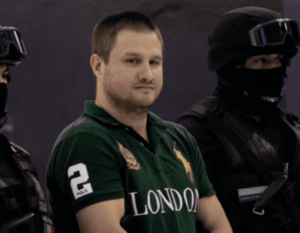 A notorious Mexican-American drug lord and hitman has gone missing from a federal prison in Florida where he was serving a 49-year sentence.

Edgar Valdez-Villareal, known as ‘La Barbie,’ is a former cartel leader who is infamous for recording brutal torture sessions and decapitating his enemies. Although he is not due to be released from prison until July 27, 2056, Valdez-Villareal has mysteriously disappeared from the federal Bureau of Prisons (BOP) website and is listed as “not in BOP custody.”

Raised in Laredo, Texas, Valdez-Villareal was given the nickname “La Barbie” by a high school football coach because of his light complexion and blue eyes.

He moved to Mexico in the 1990s after he was charged in the US with dealing marijuana, soon becoming a major figure in the world of drug trafficking.

Valdez-Villareal was head of the Los Negros, which was an armed enforcement group of the Beltran Levya cartel, one of Mexico’s most dangerous groups. He also served as a top lieutenant for the Sinaloa Cartel, which was run by the infamous Joaquin “El Chapo” Guzman-Loera before he was incarcerated.