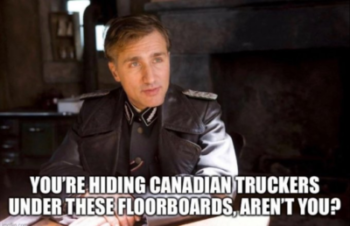 Top legal groups maintain the Trudeau government did indeed infringe on the rights of Canadians.

(LifeSiteNews) — Recently revealed notes show that Canadian Prime Minister Justin Trudeau had claimed his government’s use of the Emergencies Act (EA) to stop the Freedom Convoy did “not” result in the suspension of civil liberties, despite evidence to the contrary.

The recently revealed remarks were made by Trudeau on September 9, and come from a meeting he had with six lawyers from the Public Order Emergency Commission (POEC), the committee tasked with investigating Trudeau’s use of the EA.

A detailed interview summary of the meeting, as unveiled by Blacklock’s Reporter, record Trudeau as saying that “since the invocation of the Emergencies Act there have been people spreading the message the government suspended civil liberties, used violence against peaceful protesters and suspended democracy.”

The meeting minutes state that according to Trudeau, these things “did not happen.”

“There are those who take this message as confirmation the government is illegitimate and treasonous,” added the notes.

Despite Trudeau’s remarks, under the EA the government was able to expand its powers in unprecedented fashion, which included the seizing of some $8 million from the bank accounts of 267 different people without a court order, as well as the arresting of large numbers of people due to the act’s ability to increase police presence and resources.

One protester, an elderly lady, was trampled by a police horse, and one conservative female reporter was beaten by police and shot with a tear gas cannister.

The invocation of the EA caused top legal groups, including the Canadian Civil Liberties Association (CCLA), to decry the measure as “seriously infringe[ing] the Charter rights of Canadians.”