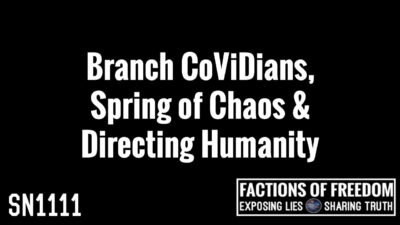 Since the earliest days of the pandemic, over-the-top, hysterical fearmongering has been an intricate component of the Public Health™ messaging.

The New York acting health commissioner, Dr. Mary Bassett, for instance, last year admitted that a health advisory released by the state intentionally exaggerated the risk of COVID to children to “motivate pediatricians and families to seek the protection of vaccination” – “motivate” being a euphemism for “manipulate”.

Here’s her defense of the state’s propaganda, in which she admits the strategy:

“The numbers that we gave on pediatric admissions weren’t intended to make it seem that children were having an epidemic of infection, these were small numbers. That was based on 50 hospitalizations, and I’ve now given you some larger numbers, but they’re still small numbers. It really was to motivate pediatricians and families to seek the protection of vaccination.”

Not content with merely inflating hospital admissions numbers and dancing on the graves of unvaccinated public figures who died allegedly due to COVID while ignoring vaxxed deaths, the Public Health™ technocrats also engage in semantical engineering.

“Referred to as the “nightmare” variant in some reports, XBB is the combination of two omicron subvariants – BA.2.10.1 and BA.2.10.75 – and is said to have a “significant growth advantage,” said Dr. Maria Van Kerkhove, an infectious disease specialist and the technical lead for COVID-19 response at the World Health Organization.”

The unelected Public Health™ overlords decided that the endless litany of new variants with nerdy names like Beta 543 or whatever fail to produce sufficient panic in the population to entice them to scurry to Walgreens™ for their twelfth Booster™.

Before COVID, scientists and medical doctors were still permitted to say in public that most viruses evolve to become more infectious and less pathogenic without fear of losing their license to practice and having their careers sabotaged.

This makes logical sense, as SARS-CoV-2’s prime directive, like any living organism’s (or semi-living organism in the case of a virus), is to survive and replicate. If it can figure out how to evade immune reaction and not kill its host, it’s likelier to thrive.

At the tail-end of the above-cited NBC article, nestled far below the headline, you’ll find the caveat, lonely and totally out of step with the panicked tenor of every preceding paragraph:

“There have been no signs of increased severity in the XBB, BQ.1.1 and BQ.1 variants.”

Reason and logic, alas, went out the window almost three years ago. So each new mutation of the virus elicits ever-greater levels of pearl-clutching by the corporate media increasingly desperate to retain the attention of an audience that – except for the most fringe sects of the Branch COVIDians like the Zero COVID cult – is ready to move on.

Ben Bartee is an independent Bangkok-based American journalist with opposable thumbs. Follow his stuff via Armageddon Prose and/or Substack, Patreon, Gab, and Twitter.

Want to fight back against the corrupt and incompetent institutions, and get rich doing it?

By building a parallel economy, we give people alternatives to big tech, public schools, corporate food producers, corrupt government agencies, and so much more.

If you start a parallel economy business, you can take market share (and power) from the bad guys, help people cut their reliance on evil and incompetent institutions, and make money in the process.

Enter your email below and I’ll send you a free video and report on 12 “Parallel Economy” Businesses You Can Start Today.

And I’ll follow that up with information about how you can participate in ground-floor opportunities in the parallel economy EVEN IF YOU DON’T HAVE THE TIME OR MONEY to dedicate to starting a new business.

Subscribe to THE DAILY BELL and immediately receive a FREE video and report: