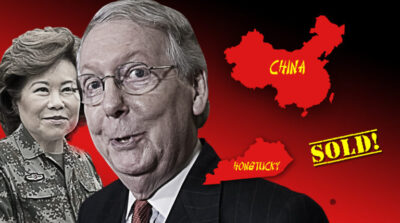 Trump Thinks Democrats Have ‘Something Big’ on Mitch McConnell

“The Marxist Democrats must have something really big on Mitch McConnell in order to get him and some of his friendly ‘Republican’ Senators to pass the horrendous ‘All Democrat, All the Way’ OMINOUS Bill,” Trump said in a post on Truth Social. “It gives Border Security to other countries, but ZERO $’s to the U.S., it fully funds the corrupt ‘Justice’ Department, FBI (which RIGGED the Presidential Election!), and even the Trump Hating Special ‘Prosecutor.’”

Trump added, “It is also a massive giveaway & capitulation to CHINA, making COCO CHOW so happy!”

“Coco Chow” is Trump’s derogatory nickname for Elaine Chao, who is not only Mitch McConnell’s wife but also served as Trump’s Secretary of Transportation. He’s been using that nickname for a least a couple of months now, and it has been criticized as racist by both sides of the aisle. I’m not sure why Trump would use such a nickname or how he thinks it helps when he is trying to make an otherwise legitimate argument.