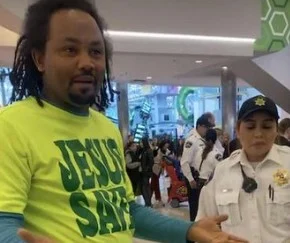 A man who was wearing a t-shirt that read “Jesus Saves” was reportedly kicked out of the Mall of America in Bloomington, Minnesota for his shirt being too offensive for others.

Footage of the incident went viral and shows security officers telling the man wearing the green “Jesus Saves” shirt that his shirt was “offending” other shoppers in the mall.

The security would continue to tell the man he either had to remove his shirt or leave the mall.

I automatically assumed this was overseas, but it’s right here in America. pic.twitter.com/Q79eUCG7xh