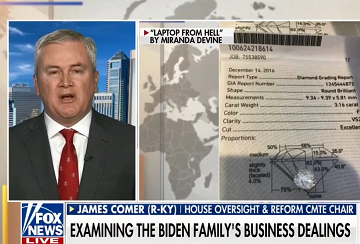 James Comer dropped this bomb in this morning’s interview.

Comer told Maria Bartiromo that Hunter Biden was given the 3.2-carat diamond from China at the same time Joe Biden was stealing classified documents and moving them around to his homes and offices.

Rep. James Comer: This isn’t the most complex investigation on the planet. Investigating the Biden family is kind of like tracking a bleeding bear in a snowstorm. There’s evidence everywhere that would point out that this family has been involved in influence peddling schemes for decades. And this is very concerning. And I think that the American people are getting a taste of this with the fact that these documents were stored in so many different locations. Does anyone beleive that those classified documents when they left the Vice President’s office that they just took them to multiple locations all over the east coast?… This is very concerning… Look we know a lot more about the diamond than I need to talk about right now. That diamond was given to Hunter about the time these documents were being transported to different locations. It’s very concerning.