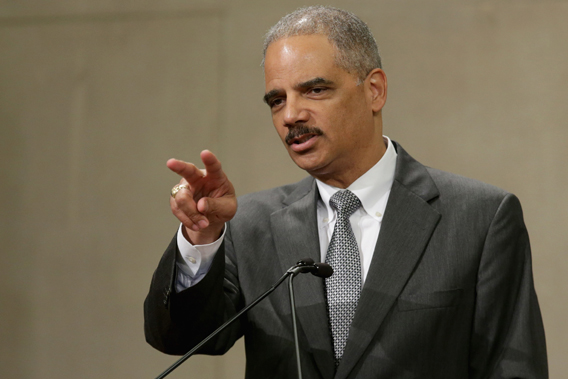 Obama’s Attorney General, Eric Holder, went before the NAACP on Tuesday and called for examining the idea that individuals have a natural right to self defense. He said government must work to eliminate “Stand Your Ground” laws in states like Florida.

“It’s time to question laws that senselessly expand the concept of self-defense and sow dangerous conflict in our neighborhoods,” the nation’s top cop said.

“We must examine laws that take this further by eliminating the common-sense and age-old requirement that people who feel threatened have a duty to retreat, outside their home, if they can do so safely. By allowing and perhaps encouraging violent situations to escalate in public, such laws undermine public safety,” a clear reference to the trial of George Zimmerman.

“George Zimmerman is not guilty of murder,” said George Zimmerman’s attorney, Don West, during the trial. “He shot Trayvon Martin in self-defense after being viciously attacked. The evidence will show you how and why it happened the way he did.”

The jury agreed and acquitted Zimmerman.

The NAACP and other civil rights groups have lobbied, so far without success, to have “stand your ground” laws repealed. “Stand Your Ground laws license vigilantism,” Ben Jealous, the president of the National Association for the Advancement of Colored People, said following Holder’s speech.

On Wednesday, the Rev. Al Sharpton told NAACP attendees he will lobby against Florida’s “Stand Your Ground” law prior to next month’s 50th anniversary of the 1963 march on Washington, D.C. He characterized the self defense law as the “worst violation of civil rights in the country.”

“Until we can overturn ‘Stand Your Ground,’ we risk more Trayvon Martins,” Sharpton said. “We cannot have our sons’ and daughters’ lives on the line for anybody who wants to pursue them and shoot them and say it was self-defense.”

In addition to rolling back laws permitting self defense, the NAACP and other liberal groups, including the Soros-funded MoveOn.org, are pushing to have Zimmerman retried on civil rights charges.

“Everywhere you go, people are talking about this,” said Curley Clark, leader of an NAACP chapter in Pascagoula, Mississippi. “We are hoping the Department of Justice will take up the cause. A lot of the rights the NAACP fought for and won years ago are now being lost.”