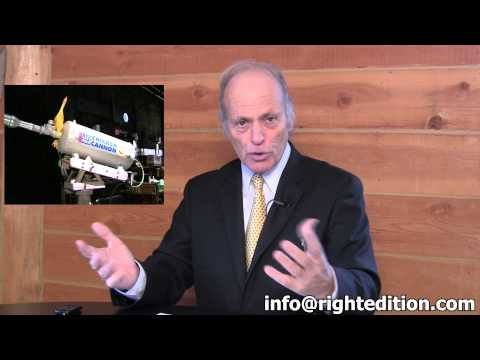 Allegedly, British rail companies borrowed the chicken gun from NASA for testing windshields for high-speed trains, but were shocked and confused at the amount of damage the gun did – the projectiles were not only breaking through the windshields but embedding themselves into seats farther down the train. When they asked NASA what they were doing wrong, NASA replied, “(Before firing) Gentlemen, thaw your chickens.”

On MythBusters, Jamie Hyneman and Adam Savage designed and built a chicken gun to put that to the test. Jamie re-used and enlarged the design he used to create the “improved” 7Up vending machine for a commercial. In place of Goodyear’s diaphragm, the air tank was connected to the barrel by a butterfly valve that could discharge the high-pressure air in an instant, and in place of the ice cream carton and the metal ring that stopped the carton, they constructed foam sabots that would fit the chicken inside the barrel and seal it but fall away into quarters before impact. After firing both frozen and thawed chickens at Piper Cherokee windshields and later at a metal plate with a high-speed camera (to measure time of impact), they declared the myth busted, but later overturned their verdict and confirmed the myth when they found that frozen chickens still penetrated further.
The CBC comedy series Royal Canadian Air Farce used to regularly use a chicken cannon to shoot rubber chickens and other projectiles at pictures of newsmakers.

China’s project to build a replica Manhattan is taking shape against a backdrop of vacant office towers and unfinished hotels, underscoring the risks to a slowing economy from the nation’s unprecedented investment boom.

The skyscraper-filled skyline of the Conch Bay district in the northern port city of Tianjin has none of a metropolis’s bustle up close, with dirt-covered glass doors and construction on some edifices halted. The area’s failure to attract tenants since the first building was finished in 2010 bodes ill across the Hai River for the separate Yujiapu development, which is modeled on New York’s Manhattan and remains in progress.
http://www.bloomberg.com/news/2014-06-26/china-s-manhattan-project-marred-by-ghost-buildings.html

Built for over a million people, the city of Ordos was designed to be the crowning glory of Inner Mongolia. Doomed to incompletion however, this futuristic metropolis now rises empty out of the deserts of northern China. Only 2% of its buildings were ever filled; the rest has largely been left to decay, abandoned mid-construction, earning Ordos the title of China’s Ghost City.

Last year I travelled to Inner Mongolia for myself, to get a closer look at the bizarre, ghost metropolis of Ordos… and the experience, as I would discover, was far stranger than anything I could have prepared for.

This post originally appeared on Darmon Richter’s The Bohemian Blog. It is republished here with Darmon’s permission as the first installation of a two-part series. Check back tomorrow for part two, exploring abandoned buildings, tunnels, construction sites, and rooftops in the world’s largest Ghost City.
THE GHOST TOWN OF INNER MONGOLIA

China’s property market is in a strange place.

With a population reckoned at 1,351,000,000 and rising fast, the resultant boom in property development has led to scores of new-made millionaires and a rapidly growing elite class; at the same time however, analysts fear that this property bubble isset to burst. The country itself owes coming on for a trillion dollars in debt.

Meanwhile, a billion people are waking up to the possibilities of fast cars, smartphones, broadband Internet and credit cards.