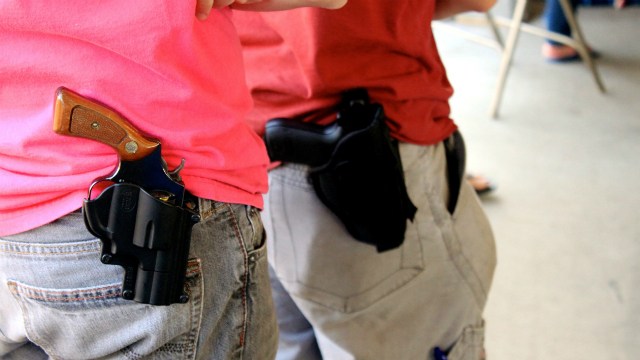 Walking in the dark. Studying in a private area. Criminal activity set us up for the need to protect ourselves.

What remains a mystery to pro-gun advocates is why a college campus should be thought of as somehow separate or different from any other place that people live and work when it comes to issues of self-defense.

Texas’ universities used to be gun-free zones under the state’s concealed handgun laws, but the Republican-dominated legislature voted last year to force public universities to allow license holders to bring their guns to campus.

The president of the University of Texas finally implemented the law on Wednesday.

Starting in the fall semester, students at University of Texas in Austin will be able to carry concealed guns into their classrooms.

The school’s president begrudgingly accepted a set of rules complying with a state law passed last year to force public universities to allow licensed holders to bring their guns to campus.

Guns will generally be banned from dorm rooms, but they will be allowed in classrooms and common areas like dining rooms and study areas. They’ll also be banned in certain laboratories, at sporting events, university bars and medical facilities.

Guns can still be banned at sporting events, in university bars and medical facilities, certain laboratories and college dorms.

But the “campus carry” measure has faced intense opposition from students, faculty and other staff, some of whom have threatened to resign.

It would be nice to be safe in society without armed protection, but this doesn’t seem to be our current environment.

Who knows who is armed and who is not? A little doubt and insecurity (for the potential perp) never hurts in these situations.

A massacre can only occur when one person has a gun and everyone else is unarmed. Where many people have guns, it is almost impossible for one person to kill nine or ten people.

Taking guns away from lawful citizens just leaves the weapons in the hands of criminals and the rest of us to be shot like fish in a barrel.