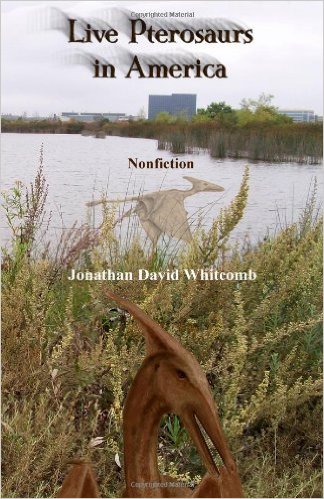 By Jonathan David Whitcomb, author of Live Pterosaurs in America

Who am I to write about the overall credibility of sighting reports of living “pterodactyls?” After all, this kind of flying creature is said to have become extinct by many millions of years ago. All their species are long dead, if common Western assumptions are perfectly correct. Yet I first need to explain what some persons have thought is equally strange. What could be as strange as accounts of dragons flying over our heads in the 21st century? I need to explain me.

I’m not a professor of paleontology. To be brief, I was a forensic videographer in 2003, when I began investigating these eyewitness accounts of “prehistoric” flying creatures or “dragons.” I recognized, while viewing some amateur video footage, the credibility of natives who were interviewed on a tropical island in the southwest Pacific. Since 2003, I have spent well over 10,000 hours researching, interviewing, exploring, and writing—all within this narrow field of cryptozoology.

That does not mean that all my ideas must be correct, of course, but I believe I’ve spent more time on this subject than any other person now living on this planet: At least some of my ideas should be considered.

I am one of six Americans who have traveled to Papua New Guinea, since mid-2004, to search for modern pterosaurs, what many Americans call “pterodactyls.” Many more persons were in television production teams like Destination Truth and Monsterquest. I mention the six of us because we’ve been involved over a long period of time (yet I don’t have the space here to explain details of what we learned from our expeditions in the southwest Pacific; we returned to the United States convinced that pterosaurs are living in Papua New Guinea). Gideon Koro, an Umboi Island native interviewed by Whitcomb in 2004

Let’s examine what’s been learned from sighting reports that are mostly from North America, with a critical eye on the overall honesty-credibility of eyewitnesses.

Sightings of apparent pterosaurs have been mostly ignored by the major media for decades, yet reports continue to come to our attention, including many accounts of living “pterodactyls” in the United States. How can we judge the credibility of such reports? Please consider the following statistical methods. They disprove any general hoax-explanation for the accounts.

Let’s divide honesty-credibility into two types: individual reports and the overall accumulation of reports. On this post, we have room only for examining general credibility, the big picture of eyewitness sightings.

Look at the statistics on pterosaur sightings. Three factors in the statistics have spoken out loudly against any general hoax-speculation, and potential hoaxes need to be addressed first. (Misidentification possibilities are an important part of credibility issues, but that needs its own space, its own post.)

At the end of 2012, I compiled much data on 128 sighting reports, 74% of which were from eyewitnesses I had interviewed myself (many by emails and telephone conversations but a few by face-to-face questioning). Soon after analyzing the data, I found three things that independently refute the criticism that reports might come from hoaxes.

Lack of Feathers – Degree of Certainty

Almost half of the 128 reports included some indication of how certain the eyewitness was about a lack of feathers on the apparent pterosaur. I was struck by the difference:

Yet the reality of the overall eyewitness testimony is perfectly understandable in this case. Honest eyewitnesses of real flying creatures should give reports that include some admissions that allow for the possibility that what appeared to have been a pterosaur might have instead been a strange bird that gave only an impression it was a pterosaur. Indeed, overall testimony demonstrates eyewitnesses are not making practical jokes.

A major contamination of the reports, from hoaxes, is extremely unlikely, from that factor alone. But before we move on, the second of the three statistical evidences against a conjecture of hoaxes—that requires an introduction. Paleontologists know, from discoveries of many fossils, that pterosaurs in the past were mostly of two types. To make it simple, let’s call them “long-tailed” and “short-tailed.” From decades of sightings and from years of questioning eyewitnesses, we see a strong indication that modern pterosaurs also come in two types: long-tailed and short-tailed. The statistics on that, however, can be shocking.

From decades of science fiction movies and television shows, many Americans have come to know something about the appearance of short-tailed pterosaurs, although we’ve called them other names:

An animation of a long-tailed pterosaur may occasionally be seen in a film or on television, but that’s an exception. Most depictions of pterosaurs in films and on television have been of the short-tailed ones, especially the Pteranodon.

In cryptozoology, especially among my associates, the word ropen is used for a modern pterosaur that has a long tail, usually with a flange or similar structure at the tail end.

Statistics on Reports of Tail Length

Of the 128 sighting reports that were analyzed statistically, 41% indicated a long tail but only 2% indicated the absence of a long tail. That’s a huge difference: about 20-to-1.

That ratio alone shoots down the general hoax-conjecture, because 75% of the 128 reports are of sightings in the United States. American hoaxers would not have mentioned long tails, so few (if any) of those 128 accounts can be attributed to practical jokes, unless somebody can provide some kind of evidence of a hoax in one of those 128 reports.

And yet that solid statistical evidence against hoaxes is magnified when it’s combined with the first factor, the significant portion of reports in which eyewitnesses admitted they were not absolutely certain about featherlessness. How is it magnified? Those two factors work independently, like two walls of defense against a malicious intruder: Few practical jokes would be able to get over the first barrier, and those few would then face a completely different kind of barrier, making it practically impossible for many intruders to get through both walls of protection. And yet there’s more: the third factor.

How Big are Modern Pterosaurs?

In the fourth edition of my nonfiction book Searching for Ropens and Finding God, (which is more about cryptozoology than about religion) I wrote:

Do you notice anything unusual about the above wingspan estimates? The 74 eyewitnesses who estimated wingspan—they together gave us what no individual person could have given us:  honesty-credibility in size estimates. If you noticed a very even range of sizes (from small-bird size to airplane size) you may find it strange. If a species of pterosaur survived into modern times, how could it be so many different sizes? We’ll get to that. But first we need to see how those estimates count against a general hoax-conjecture.

How big are the animation “pterodactyls” we have seen in movies and on television? Mostly big ones. How would an American hoaxer lie about a wingspan estimate? The lie might be to shock people, in which case the “wingspan” would be well over ten feet, perhaps even twenty feet. But whatever the motif of the practical joker, a wingspan “estimate” would not likely be similar to that of a common bird. Why not? The hoaxer would not want anybody to think it might have been a misidentified common bird.

So what might we predict if the reports were contaminated by hoaxes? Wingspan-estimate lies would then cause a bulge in the statistics, if many pranks were involved, and that bulge would be obvious at around the 10-25-feet range. Even a moderate number of hoaxes would cause some degree of bulge at about that area of a graph. The absence of any bulge suggests an absence of hoaxes.

By the way, the above numbers were not put into graph-format because the result would be close to a flat line, a boring image. The tiny bumps and mini-potholes would have no statistical significance, for they would be too small.

Why do Modern Pterosaurs Come in so Many Sizes?

Don’t misunderstand those 74 wingspan estimates. They’re from 74 reports of sightings people have had, and that may be of little help in picturing how many modern pterosaurs may exist in any particular size. That requires explaining.

Modern pterosaurs are mostly nocturnal and in some degree rare. That’s part of the reason they’ve not yet been officially discovered and classified in modern Western biology textbooks. Most sightings, however, are in daylight, when people can see.

But when a long-tailed featherless creature flew across Campus Drive, just north of the University of California at Irvine, on a summer day in 2007, it could not be missed. That creature was huge and flying right in front of a man who was driving his car on Campus Drive. The following is from Searching for Ropens and Finding God:

The dark animal flew “at low altitude” right in front of the man’s car, as he was driving north on Campus Drive. He could tell how long it was because it was so low as it crossed that road: The length of the creature was the width of the road. Half of that length was a straight tail with a “triangle” shape near the end.

One year later, I drove to the wildlife sanctuary near where the man saw that creature. I paced off the width of Campus Drive at that point: close to thirty feet. The point is this: On that week in the summer of 2007, in various places on this planet, a hundred bird-sized relatives of that giant flying creature may have flown overhead in potential view of many humans, yet because of their bird-size they might not have been noticed by anybody.

The giant-sized ropens may be extremely rare, and eyewitnesses brave enough to report observing a giant “dragon-pterodactyl” may be just as rare. Yet the smaller flying creatures are surely more common than the largest ones, and eyewitnesses who observe smaller ones may be more likely to report them to a cryptozoologist like me.

Keep in mind that large creatures, of whatever species, were once much smaller, and the juveniles are more common than the largest ones, especially with animals that continue to grow throughout their lives.

Yet that is only part of the explanation for why the wingspan estimates are so even. I found one answer that is easy to explain. Those 74 numbers are wingspan estimates, and people can easily make mistakes when they’re guessing sizes, especially when the object is unfamiliar and up in the air where there are no nearby points of reference. Surely many errors of judgment were made in the estimates and the averages of those mistakes evened out the numbers to some extent.

Before we wrap up the wingspans, I’d like to explain the fractional values. Most of them come from eyewitnesses who gave a range like “10-15 feet,” which I would have averaged to  the number “12.5”.

Why do Pranksters Appear to be Extinct?

With all that evidence for an absence of hoaxes, does that mean jokesters have become extinct? Not at all. We often see their work on sites like YouTube, where nameless eyewitnesses seem to have videotaped flying pterodactyls that sometimes look curiously like animations from film and television or at other times look amazingly like Frigate birds.

Perhaps hoaxers have avoided me and my associates for a number of reasons:

Almost nothing has been said here about any specific sighting. Yet the issue of credibility is critically important in these investigations. Understanding the overall honesty-credibility of the eyewitnesses helps us open our minds to what those ordinary persons have to say about their encounters with these extraordinary flying creatures. The following are some resources on the sightings themselves, the fascinating details about encounters with what are very likely modern pterosaurs:

“Reports of Living Pterosaurs in the Southwest Pacific” (scientific paper)

American cryptozoologist who interviews eyewitnesses from various parts of the world