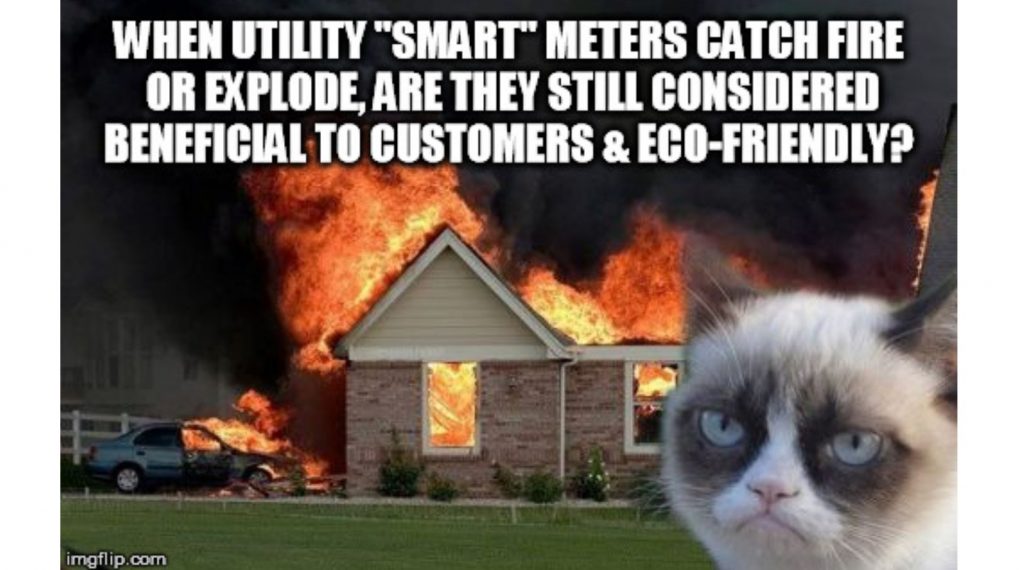 195 Exploding E-Cigarettes Get More Attention Than Hundreds of Thousands of “Smart” Meters Replaced Due To Malfunctioning, Fires, Or Explosions

News coverage of exploding e-cigarettes has been widespread.  Lawsuits have been filed.

Here are excerpts from a recent IEEE Spectrum article, February 26, 2018:  “Exploding e-Cigarettes Are a Growing Danger to Public Health.”

During the approximate same time period, hundreds of thousands of wireless or digital utility “Smart” Meters have been replaced due to malfunctioning that has also caused fires and explosions.

In 2015, “Hundreds of smart meters simultaneously explode” in Stockton, California.

Another organization wrote a follow-up article which investigated further into the Stockton explosions and similar situations elsewhere.

More recently in California, PG&E customers and their insurance companies have been filing lawsuits due to their utility “Smart” Meters catching fire and/or exploding.

Over the years, there have been others who have also filed lawsuits against their utility companies after wireless or digital “Smart” Meters were installed and caused problems.

A few experts suggest that smart-meter conversion represents little more than a boondoggle that is being foisted on consumers by the politically influential companies that make the hardware and software that are required for the smart-meter conversion. And based on our investigation, it’s difficult to disagree.

According to a more recent article from Energy Central,

… the only metric on which these smart meter deployments could be considered as successful would be number of meters deployed. And this is only because they were essentially mandated.

Utility companies still insist on installing wireless and digital “Smart” Meters all over the world.  They claim they are beneficial to customers and are good for the environment.