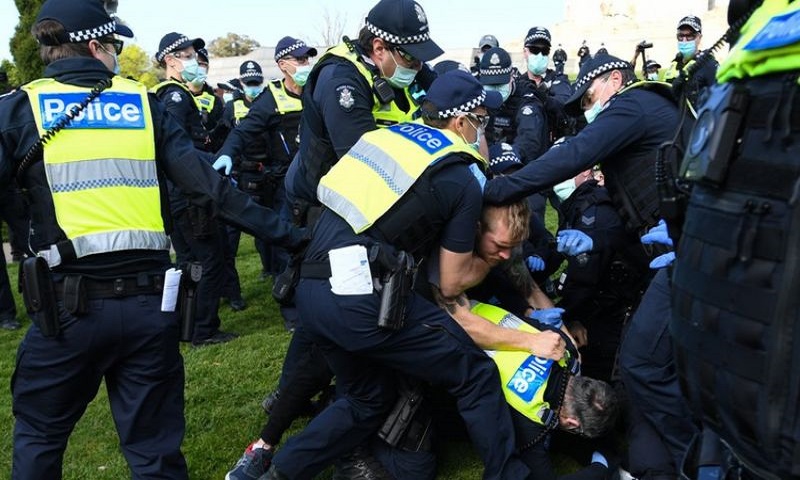 Unless you’ve been under a rock, or you only get your information from mainstream media — who is all but completely ignoring it — you’ve likely seen the utterly disturbing police state measures being rolled out in Australia in the ostensible reaction to the pandemic. Though the pandemic has largely spared the country when comparing them to other places, the tyranny being rolled out is unprecedented.

Since the beginning of the pandemic, the Australian government has been increasingly restricting freedom until people were essentially locked in their homes and told not to talk to one another.

Military helicopters patrolled neighborhoods, ordering those who simply wanted to get a breath of fresh air, to get back inside. Jackboots on horses patrolled the streets as folks who attempted to organize protests were visited by police and snatched up in the night.

The Australian government’s boot had been placed on the necks of its people and showed no signs of letting up. But a people can only be pushed so far before they eventually become so desperate that their fight-or-flight instinct kicks in — and three weeks ago, thousands of folks decided to start fighting.

Though protests were deemed unlawful, thousands of Aussies took to the streets to tell the tyrants that they weren’t going to take it anymore. It got violent quickly.

Last weekend, thousands of protesters who were being blocked by police from demonstrating decided enough was enough and they decided to resist with violence.

Obviously I’m for peaceful resolution. But what choice has the govt of Australia given their people? If this comes to the us, expect even more. https://t.co/TQIWc0UGia

This was a victory — albeit a temporary one — in which brave men and women told the state that they aren’t going to take it anymore. But the Australian government had no plans for backing down, so they brought out the big guns, literally.

Multiple video have surfaced since last weekend showing Australian militarized police in tactical gear, opening fire on unarmed citizens for simply being outside.

One of the most disturbing videos captured the scene at the Shrine of Remembrance protest on Tuesday, during which hundreds of militarized police opened fire on completely peaceful protesters who simply wanted their voices to be heard.

Raw footage of the final two minutes of the protest at the Shrine of Remembrance. 22.09.21 pic.twitter.com/9m8JT24fW1

In one instance, an Australian citizen asked a cop why he was going along with such tyranny, to which the cop responded, “I’m just doing my job.” As TFTP has pointed out on multiple occasions, hundreds of millions of people have been killed in the last century alone — by people just doing their jobs.

People just doing their jobs can murder you in your home and claim qualified immunity. https://t.co/bA50kqOqUw